The “MIX“ moniker has become quite a popular one since the launch of the original Xiaomi Mi MIX. Naming a smartphone “MIX” basically means creating a tri-bezel-less clone of Xiaomi’s concept phone, with rather thin top and side bezels, and the selfie camera moved below the display. Two of the more interesting devices bearing the MIX name are the Vernee MIX 2 and the recently launched AllCall MIX2; let’s compare the two! 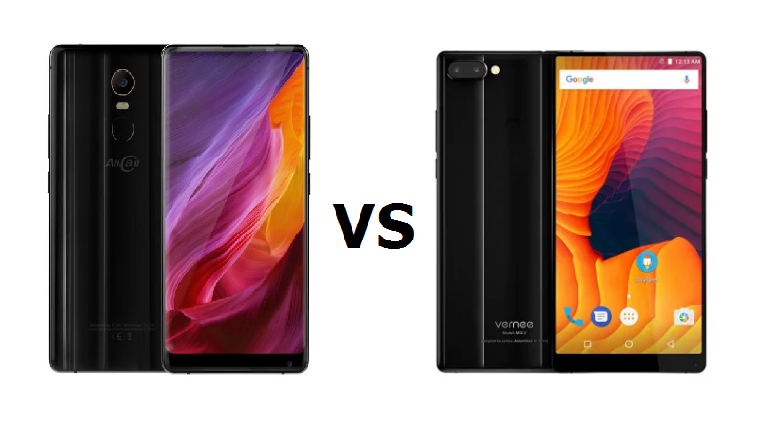 As far as the rest of the body goes, the AllCall MIX 2 utilizes a 3D curved back panel created with IML technology which shines under direct sunlight. The Vernee MIX 2 on the other hand, sports a glossy back with a mirror finish to it.

In the camera department we have the AllCall MIX2 packing a 16MP rear shooter with F/2.0 aperture and PDAF and an 8MP selfie snapper. Meanwhile the Vernee MIX 2 flaunts a 13MP+5MP dual-camera on the back and an 8.0MP front shooter. The fingerprint scanners are placed on the back on the two phones, so no difference there, what makes the AllCall MIX2 slightly better is the built-in Face ID recognition system to unlock the phone. Another plus for AllCall’s phone is the presence of wireless charging of the fast kind at 10W with supported chargers.

Finally, a really important factor to consider when purchasing a phone: pricing. The AllCall MIX2 and Vernee MIX 2 come with incredibly close price tags, the former does indeed cost $189.99, meanwhile the latter is available for $188.88. Given the very small price difference, the AllCall MIX2 appears to be the better alternative as it comes with additional features such as wireless charging and Face ID along with the more modern Helio P23 CPU. What do you guys think? Let us know down below!

For those who aren’t aware, AllCall MIX2‘s presales just kicked off over on Tomtop; head over there to learn more about the phone or get one.

Previous HOMTOM S9 Plus, S12 & HT70 on Sale at AliExpress