Chinese manufacturing giant, Xiaomi, has started the year on a high note. Late last year, the company released the Xiaomi Redmi 5A which has turned out to be a hit in the low-end market. This year, however, we have seen the flagship Xiaomi Mi MIX 2S and the less expensive Redmi Note 5 Pro. These devices and a host of others have ensured that Xiaomi remains top of the Indian market for three consecutive quarters (according to IDC’s latest statistical report). Recall that Xiaomi currently ranks fourth in the Chinese market and it is second in the Indonesian market. 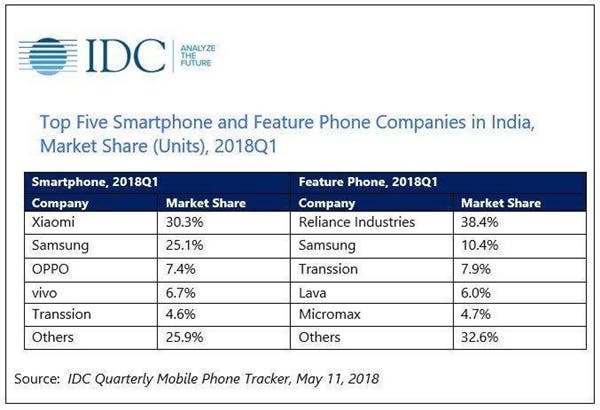 IDC 2018 India’s smartphone market report for the first quarter showed that Xiaomi is the number one in the Indian market for the third consecutive quarter with a market share of over 30%. India’s former largest smartphone brand, Samsung came second with a market share of 25.1%. This was followed by OPPO (7.4%), vivo (6.7%), Transsion (4.6%), and other brands 25.9%. It can be seen that Chinese smartphones have become the mainstream of the Indian market, and the share of Indian brands continues to shrink.

In addition to the Indian market, Xiaomi also has a good record in Indonesia and Europe as stated earlier. In the first quarter of this year, Xiaomi became the second-largest smartphone brand in Indonesia with an explosive growth of 1455% year-on-year. In the European market, Xiaomi Mobile shipped 2.4 million units in the first quarter of 2018 (an increase of more than 999%), and its market share soared to 5.3%. At the end of this month, Xiaomi will hold a new product conference in Shenzhen and formally launch the new flagship Xiaomi Mi 8. The new machine is expected to become the first Android phone supporting 3D structured light face recognition which means that it will have an iPhone X-like facial recognition feature. This smartphone will also come with an on-screen fingerprint sensor.

Next Oppo Realme 1 with Helio P60, 6GB RAM launched at a jaw-dropping price