Earlier today, Xiaomi announced that it will have an event in Shenzhen where the Chinese manufacturing giant is expected to debut the alleged Xiaomi Mi 8. There is still a bit of confusion in the rumor mill. Some sources believe that the Mi 7 was canceled and replaced with the Mi 8 which will coincide with Xiaomi’s 8th-anniversary celebration. However, other sources claim that both smartphones will be released and the Mi 8 will be an upgraded version of the Mi 7. In either case, part of the aesthetics of Xiaomi Mi 8 just surfaced online and it revealed something interesting. Well, we already know that this device will be using a notch thus a couple of Android users are hating it already but the notch is not for nothing. From the released image, the Xiaomi Mi 8 will come with a 3D structured light technology which means it can provide the same face recognition features as the iPhone X. 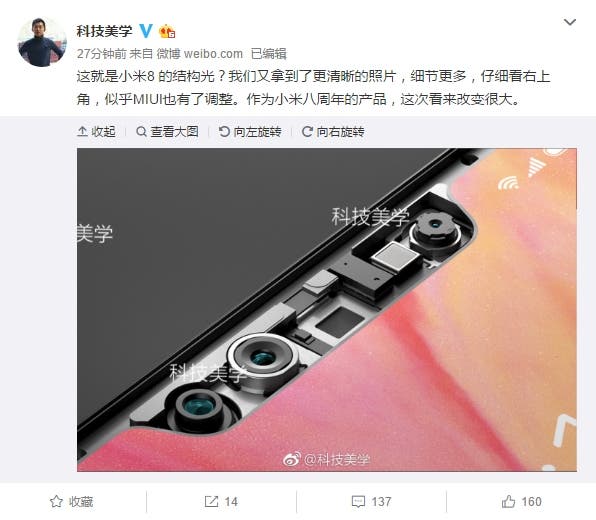 The principle is that the structured light projects specific light information onto the surface of the object and it is captured by the camera. Due to the change of light signal caused by the object, the camera calculates the position and depth of the object and then restore the entire space. Unlike traditional facial recognition, 3D structured light technology is more secure and can be used for mobile payments.

From what we know so far, the Xiaomi Mi 8 will sport a 2.8GHz Snapdragon 845 processor based on 10nm LPP process using Kryo 385 architecture. We also expect a version with 8GB LPDDR4X RAM and UFS 2.1 flash memory will naturally not be absent. Considering the fact that this device will be using an on-display fingerprint scanner like the VIVO X21 UD, we can only hope for a super flagship. What do you think of the Xiaomi Mi 8? Let us know your thoughts in the comments.