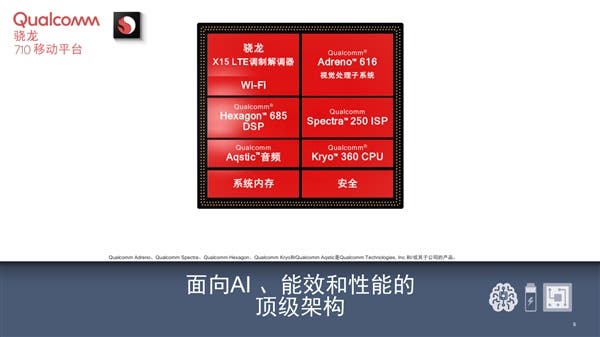 The CPU uses a Kryo 360 custom architecture, including two 2.2GHz large cores and six 1.7GHz small cores. Thanks to it and Samsung’s latest second-generation 10nm process manufacturing, the performance is increased by 20% in comparison to the Snapdragon 660. At the same time, the power consumption was improved a lot. Now you can play games longer up to 40% and watch videos up to 20%. 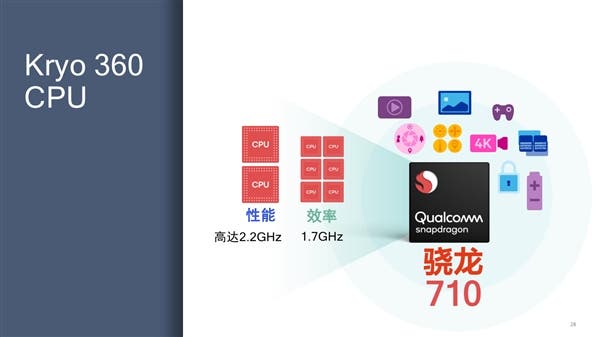 Actually, the Snapdragon 710 does not use an independent neural network unit, but provides a set of AI solutions through hardware and software integration, with an optimization at the platform level. If comparing with the Snapdragon 660, the AI performance is improved 2x.

The connectivity is improved a lot. The chip integrated the X15 LTE baseband and supports LTE Cat.15 network standard. The max download speed is up to 800Mbps, dual-antenna 2×2 802.11ac Wi-Fi, Bluetooth 5.0, and TrueWireless Bluetooth stereo. With the combination of the above technologies, the Snapdragon 710 not only has a faster download speed than the Snapdragon 660 but also has a wider coverage, especially when the signal is weak. 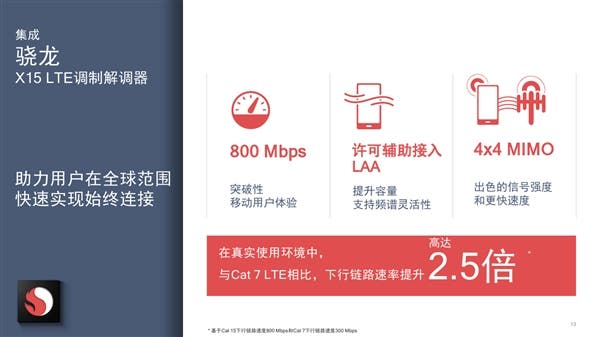 Thanks to the Spectra 250, there are tons of improved features such as a support up to a 32MP single camera and 20MP dual cameras and a use of multi-frame synthesis noise reduction with hardware acceleration. In comparison to the previous algorithm, the time is shortened and the power consumption is greatly reduced at the same time. 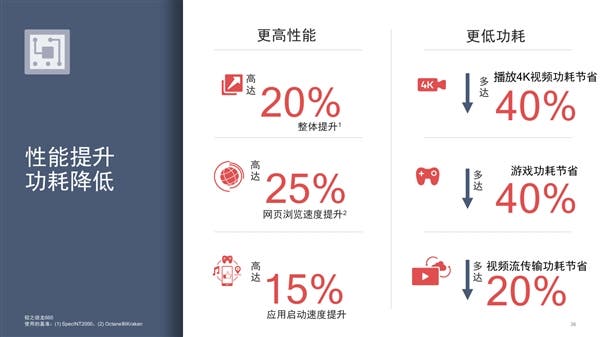 The video recording supports up to 4K Ultra HD resolution and consumes 40% less power than the Snapdragon 660. The Snapdragon 710 brought a 64-fold increase in color tone, supporting uncompressed 10-bit 4K HDRs and a maximum of 1.07 billion colors.

This chips also integrates an Adreno 616 flagship graphics, rendering up to 35% faster than the previous generation, and supports Vulkan API, Unreal/Unity game engine, and lower power consumption. Apart from this, it supports Google ARCore. They have been worked hard to bring more immersive and more realistic AR apps. 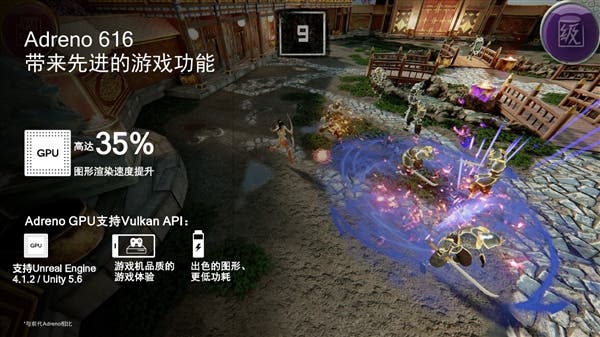 The battery features are amazing. It supports QC4.0+ and dual parallel charging. Plus, the charging time and the charging efficiency have been improved by 20% and 30%, respectively. A regular phone with this SoC can charge to 50% in 15 minutes or even shorter. Of course, it supports USB Type-C, USB PD, Best Voltage Intelligent Negotiation Power Management Algorithm (INOV), Accurate Voltage, Current and Temperature Measurements, and system protection is also in place.

The first phones sporting the Snapdragon 710 mobile platform will be available in the second quarter of 2018.