There has been a couple of misunderstanding as to the proper nomenclature of the Xiaomi Mi 8. At the beginning of the year, we were expecting two flagships from Xiaomi – Xiaomi Mi 7 and Xiaomi Mi MIX 2S. The latter has since been launched but whats the fate of the former? A few weeks ago, Xiaomi Mi 8 made a sudden appearance online fueling reports that Xiaomi Mi 7 has been canceled. Now, the company has had its say on this. 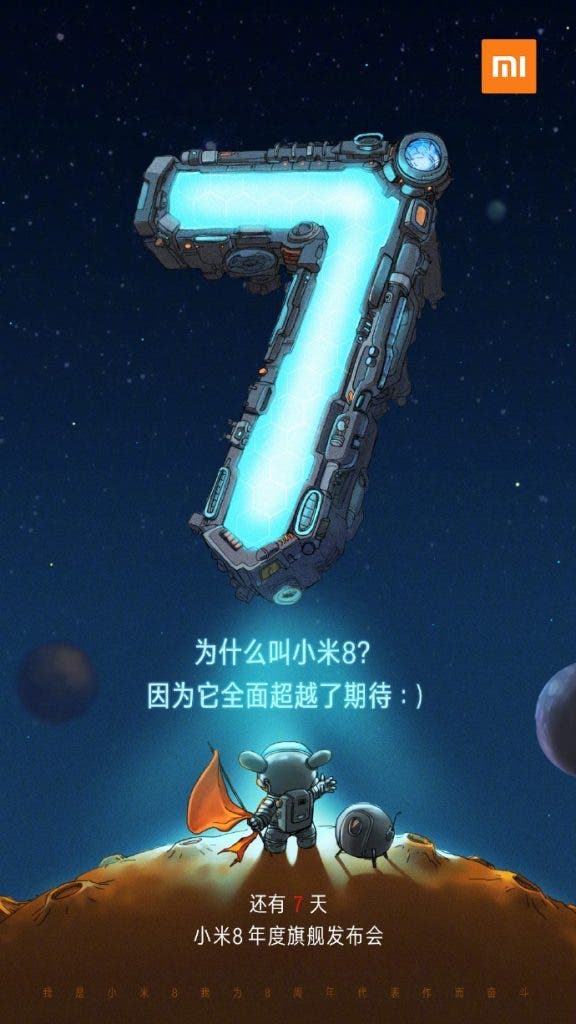 Today, Xiaomi released a 7-day preview poster which clarified the origin of Xiaomi Mi 8. The company said that the smartphone being prepared for launch completely exceed expectations and it believes that it is the sort of device that should be used in commemoration of significant events like its 8th anniversary. This strongly implies that the company was working on perfecting the Xiaomi Mi 7 when it realized that there are some features which it could add to make it a “super flagship” smartphone. It then subsequently decided to name this upgraded Mi 7, Xiaomi Mi 8. However, the fate of Xiaomi Mi 7 is still in the balance. It would be nice to see a lower version of the Mi 8 probably smaller in size, without the 3D structured light technology and definitely without a notch – which can be called Xiaomi Mi 7.  It will still have an on-screen fingerprint sensor and wireless charging compatibility as flagship features.

According to previous reports, Xiaomi Mi 8 is expected to be the first Android flagship to support 3D structured light face recognition. Its display has a notch which has not less than seven sensors. This smartphone will be powered by a Snapdragon 845 SoC coupled with 8GB LPDDR4X of RAM and a UFS 2.1 flash memory and wireless charging compatibility. Click HERE for more. Will you love to see a notch-less Xiiaomi Mi 7 as described above?