Fresh speculations and rumors about the upcoming Xiaomi Mi 8 are churned out daily. So far, most of the speculations revolve about its nomenclature and whether or not it will replace the Xiaomi Mi 7. Rumors of the features of this smartphone are quite scarce. This is because the rumor mill concentrated on its 3D structured light technology compatibility (which will enable it to have an iPhone X-like face recognition feature) and the on-screen fingerprint sensor which Xiaomi will be using for the first time. However, we now have a leak of the major specs of this smartphone. 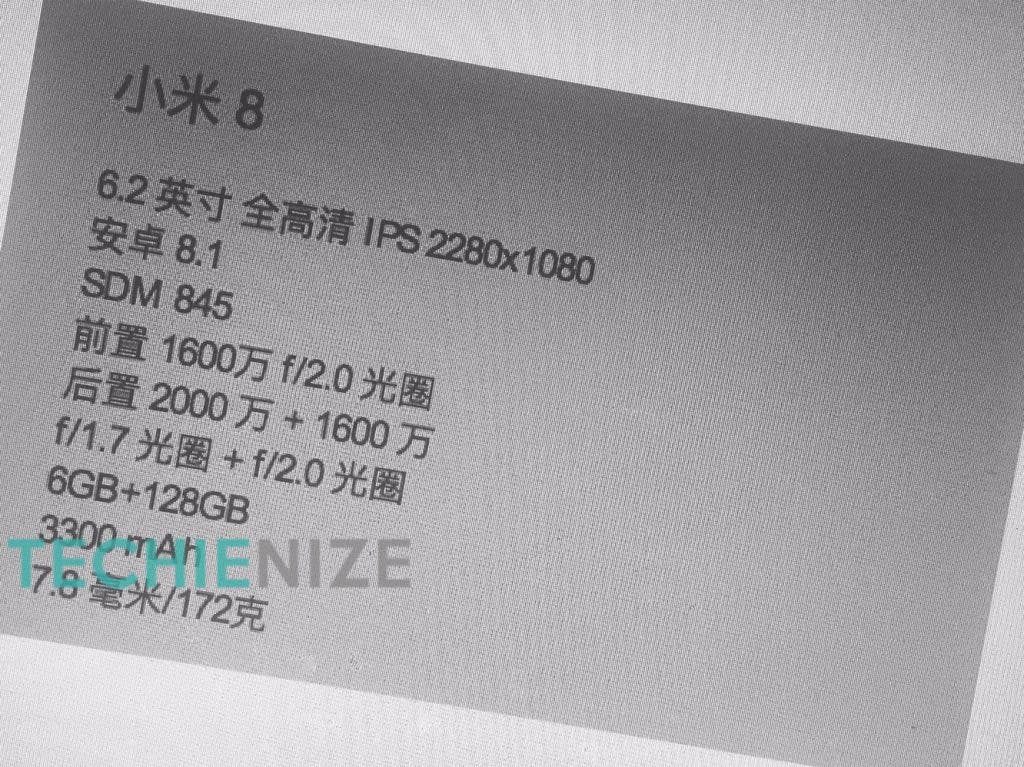 From the recent exposure, the Xiaomi Mi 8 weighs 172 grams and it is only 7.8 mm thin. It will be powered by a Snapdragon 845 processor which is already well known before now. This SoC will be supported by 6/8GB of RAM and 128GB of internal storage. This smartphone will be equipped with a 6.2-inch Full HD screen with a display resolution of 1080 x 2280 pixels. In the camera department, we will have a dual rear camera setup which has 20MP+16MP with an aperture of f/1.7 and f/2.0 respectively. This is supported by another 16MP (with f/2.0 aperture) shooter up front. The lights of this smartphone will be kept on by an average 3300 mAh battery but since it will run on Android 8.1 Oreo out-of-the-box, the battery should fuel this device acceptably.

For those who have not been following the proceedings of the conference, Xiaomi will host a press conference at the Shenzhen Universiade Stadium at 14 o’clock on May 31st where the company is expected to release the Xiaomi Mi 8 alongside other Xiaomi products (most notably Xiaomi Mi Band 3 and MIUI 10). The ticket will cost 99 Yuan ($16) but there is an opportunity to win three free tickets. Sales of tickets started about five hours ago on Mi Mall App and mi.com thus it is most unlikely that any ticket will be remaining.

Previous Xiaomi To Issue Free Tickets For The Mi 8 Conference

Next Xiaomi Clarifies The Origin Of Xiaomi Mi 8 - Fate of Mi 7?