The Moto Z3 Play is supposedly coming on June 6th, when Motorola is expected to reveal a new smartphone for the Moto’s line in Brazil. We already got a glimpse of the smartphone specifications on the last week, but today a new pair of pictures leaked revealing the smartphone on all its glory alongside a 5G Moto Mod.

We already got an idea of Moto Z3 Play appearance and design considering all the previous leaks and renders that surfaced on the web. Based on this, the biggest leak of today is the existence of this new 5G Moto Mod. The first talks regarding such accessory started in 2016 when the 5G network still was in development and concept phase, now that the carriers are almost ready to push the new blazing-fast data network, Motorola seems ready to deliver this kind of capability-extensive accessory. Unfortunately, no much details have leaked about this new Mod, but would be interesting to see if the above accessory will be supported by the old Moto Z smartphones. It has a unique design and an antenna placed on the top.

The Moto Z3 Play itself is expected to be the first smartphone of Moto Z line to feature an 18:9 AMOLED display of 6-inch and 2160×1080 pixels of resolution. You can expect thinner bezels, one time that the Z3 Play will have a larger display but will need to have the same form factor of its predecessor in favor of Moto Mods advertised 3 years of support. Under the hood the smartphone will be favored by the newest mid-range king – Snapdragon 636 – The Kyro 1.8GHz Octa-Core CPU will come paired with 4GB of RAM alongside 32GB or 64GB of internal storage. 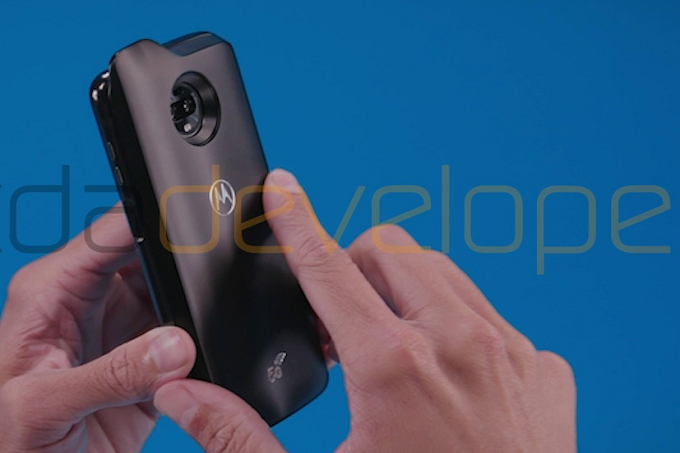 On the camera department, the Moto Z3 will feature a dual camera setup on the back which consists in a 12MP f/1.6 camera + an 8MP unit with PDAF, laser autofocus, and a dual-tone LED flash. On the front, the handset will feature a 5MP camera for the selfie enthusiasts pleasure. Furthermore, the smartphone will come with Android 8.1 Oreo right out the box, that means that it will support Project Treble and can receive future Android updates like Android Popsicle (Kidding) in a near future. All those specs will be fueled by a 3,000mAh that isn’t a mind breaking capacity, but considering the CPU’s power efficiency, it should last an entire day of normal usage.

More details about the smartphone and this 5G Moto MOD should emerge in the coming weeks, but of course, in no more than 11 days we’ll know the Moto Z3 Play in all its glory. So don’t forget to schedule a note for June 6th, We’ll be covering all the details of the smartphone launch in Brazil.