Oppo Find X, the upcoming flagship smartphone from Oppo that is said to succeed the Oppo Find 7 has for quite some time been subject of rumors, however, the device resurfaced in the rumors mill lately when Oppo via a couple of teaser hints that the device might break cover sooner.

While Oppo hasn’t revealed any substantial info about the upcoming device, a new leak from out of China’s Weibo gives us a not too vivid look at what to expect from it in terms of specifications. Though no visual leak is available as of now, the latest info from China lays out a brief overview of the internal specs, hinting that the device is definitely meant to fit into the premium segment of the market.

Based on what we can deduce from the Weibo leak, the Oppo Find X will include a 6.42-inch 2K+ FullView display with a high screen-to-body ratio. There are no ways to determine if the device will feature the trendy notched display, or will adopt a fully-bezel free display as is rumored for the upcoming Lenovo Z5, that should become obvious in the days to come. As per the leak, the device is expected to house a Snapdragon 845 64-bit Octa-core SoC paired with 8GB RAM and 256GB storage.

The leak further reveals that the Find X will come stuffed with a mammoth 4000mAh battery with support for Super VOOC fast charging technology, and while many believed it might be launched with Android P out of the box, latest developments suggest otherwise as the device could launch way earlier than the full arrival of the next Android OS.

The Find X will feature a structured light 3D technology which should offer the 3D facial scanning feature as seen in the iPhone X and Xiaomi Mi 8 Explorer Edition, while it will come with dual rear cameras with the 5X Lossless zoom technology. 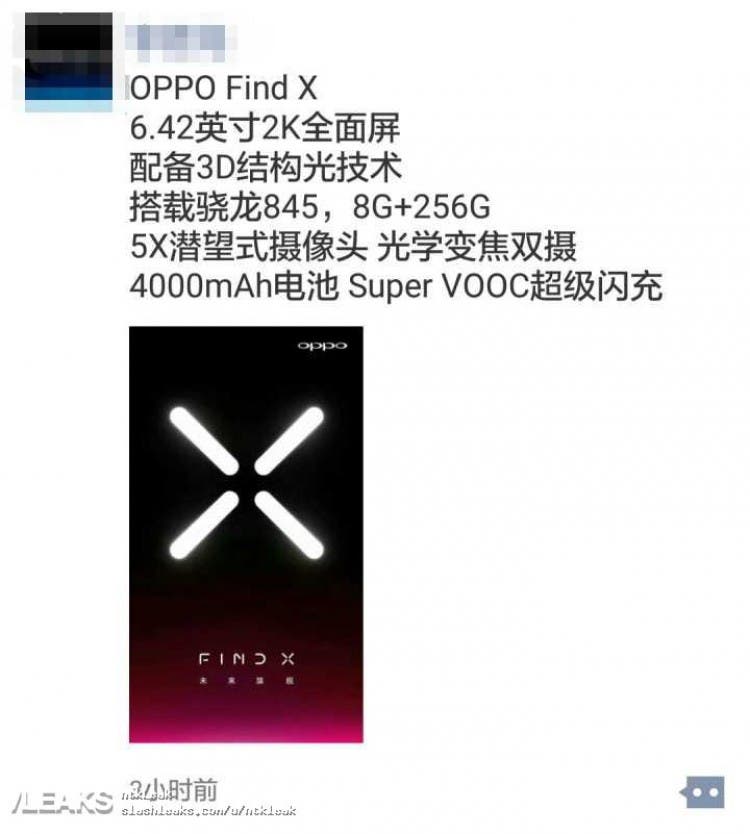 Ready for the Oppo Find X? We’re already seeing rumors/ leaks, so the device might break cover sooner than later.