Smart speakers or virtual assistants, whatever name you decide to call them, they are very useful, handy, and they are winning the world. There is a statistics showing smart speakers are now owned by one in six Americans. Those products are not only used in home automation, but also in business. Initially, maybe the smart speakers have been launched with another purpose in mind. But now everything has entirely changed. Say, Amazon Echo should be made to boost the sales. The Google Home is ideal for making searches. The Apple HomePod provides superb sound quality and works perfect with Siri. This list is too long. And as you see, each of them may have an original mission. But what about business? Why the smart speakers can’t be used for business purposes? They sport all the necessary features to make your business work more efficiently. Of course, they may help in daily office tasks and during conference meetings. In this sense, the Jabra brand seems to be a step forward in comparison to other smart speaker makers. But a few days ago eMeet introduced the first AI smart conference speaker dubbed as the OfficeCore M2. The Jabra 710 has been very popular recently. But with the launch of this amazing speaker, eMeet is going to get the crown. 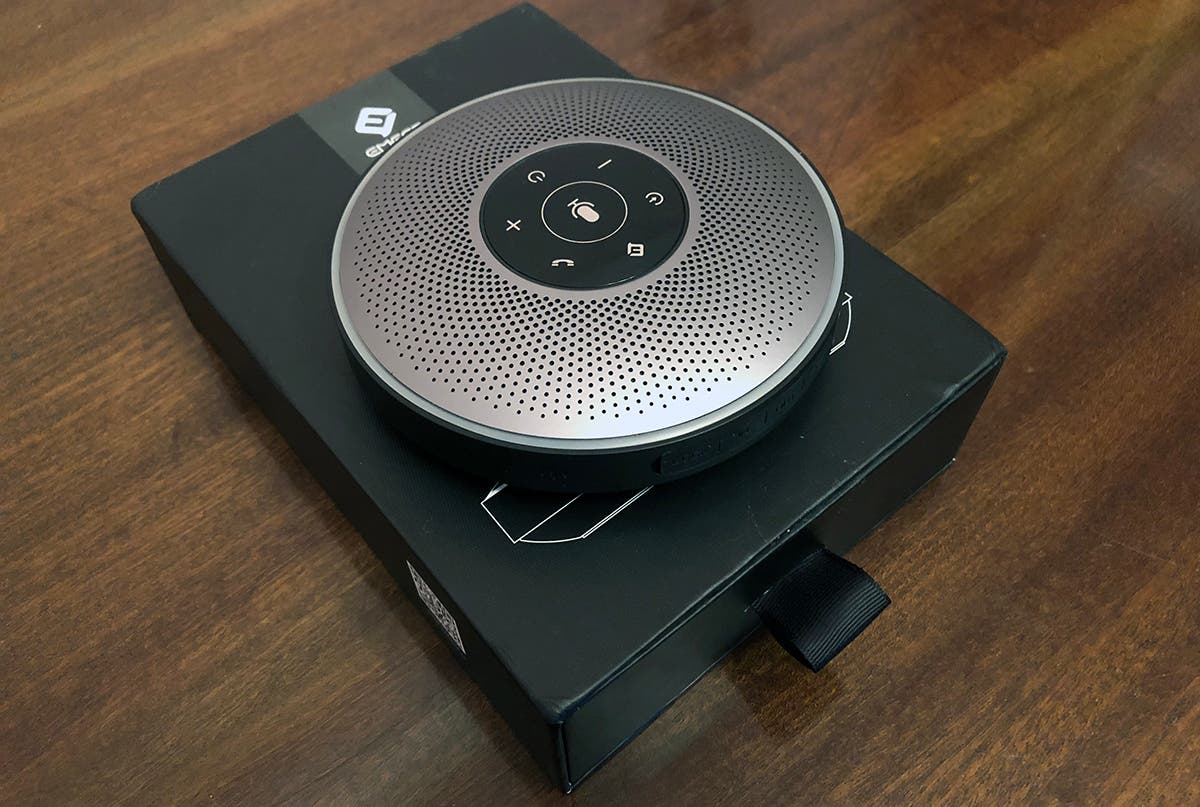 Actually, eMeet has a huge experience in making smart conference speakers. Its previous flagship, the OfficeCore M1 was very popular and was competing with the Jabra 510. As for the OfficeCore M2, it is targeting the Jabra 710, we guess. Our protagonist was announced back on May 15. It made a huge stir because eMeet develops and markets high-tech conferencing devices, came in with a high-performance Bluetooth portable speakerphone that integrates the functionality of VoiceIA algorithm background noise and echo suppression, AI algorithm sound capture and automatic volume adjustment, 4 high sensitive MEMS digital microphones array, and Bluetooth 4.2 technology into a compact and portable device. Thus, we are dealing with a conference speaker that will fix all the bugs met during multi-person meetings and calls. We also know how annoying badly adjusted microphones can be during conferences. So as the name suggests, the eMeet OfficeCore M2 should provide corresponding solutions.

In order to take a look at its look, learn the hardware features, and find out what business-oriented features it comes with, we have got our hands on it. So let’s dig deeper and test it.

In comparison to the OfficeCore M1, this model is more compact. Therefore, it can be placed in a smaller box. The company has done just that. The OfficeCOre M2 is placed in a black box (at least, the one we got was black). Inside the package, we can find two cables (USB and AUX), a user manual in a few languages (including English), and the speaker itself.

Note: there are models that are packed with a Bluetooth USB adapter. The one we got doesn’t have. 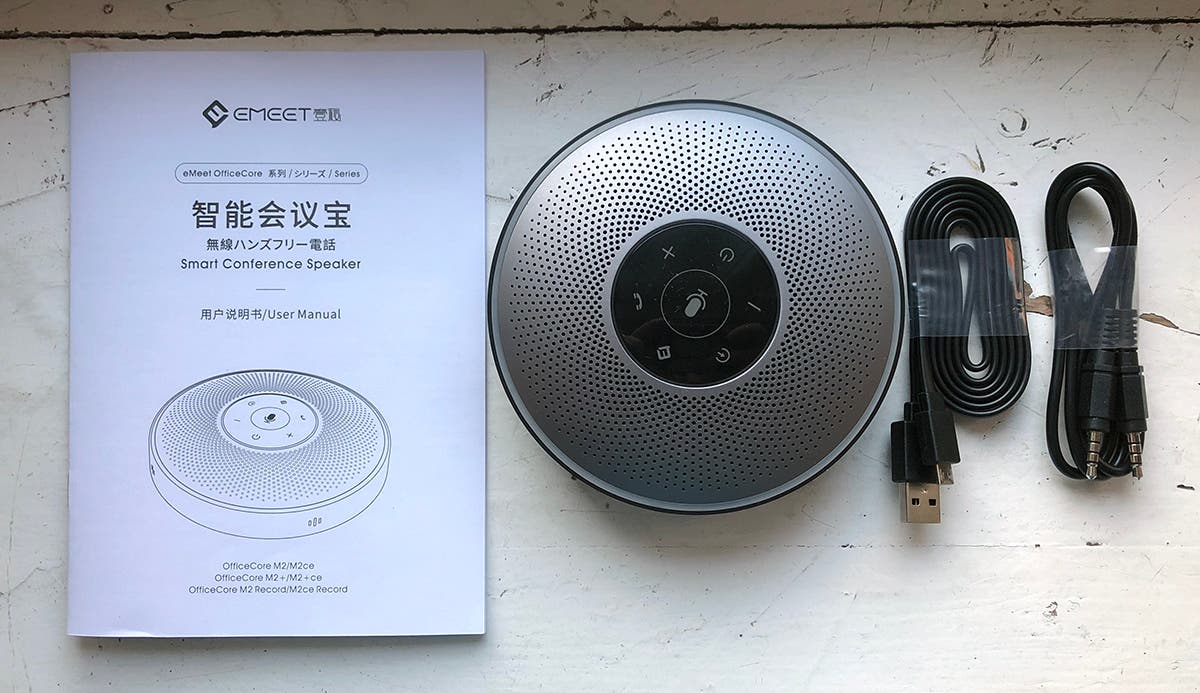 The first thing caught our eyes is its more compact design. The top surface is slant. In the central part, we can find the main operational keys. They are not press-able. By the way, this is the second biggest difference. So you will interfere with the OfficeCore M2 through taps and touches, of course, when you are not using voice commands. 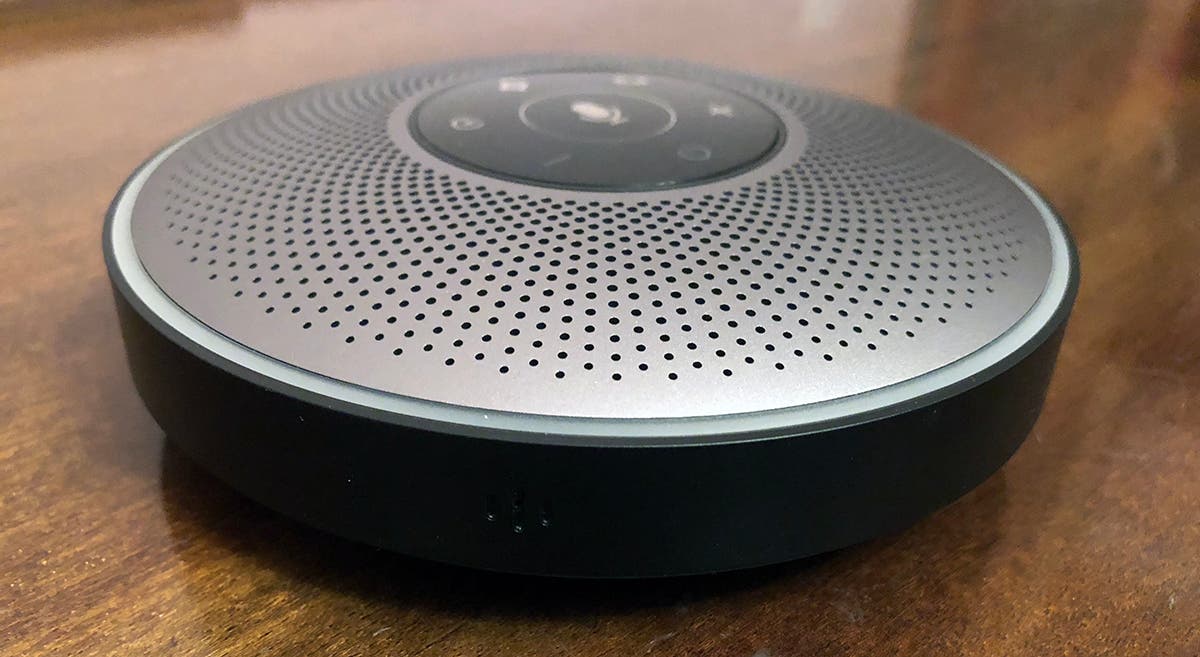 The overall size and weight are familiar to other models on the market. It comes with dimensions of 125x125x35mm and weighs 300 grams only. However, unlike the previous model, there is no carrying case. So you should acquire it separately. 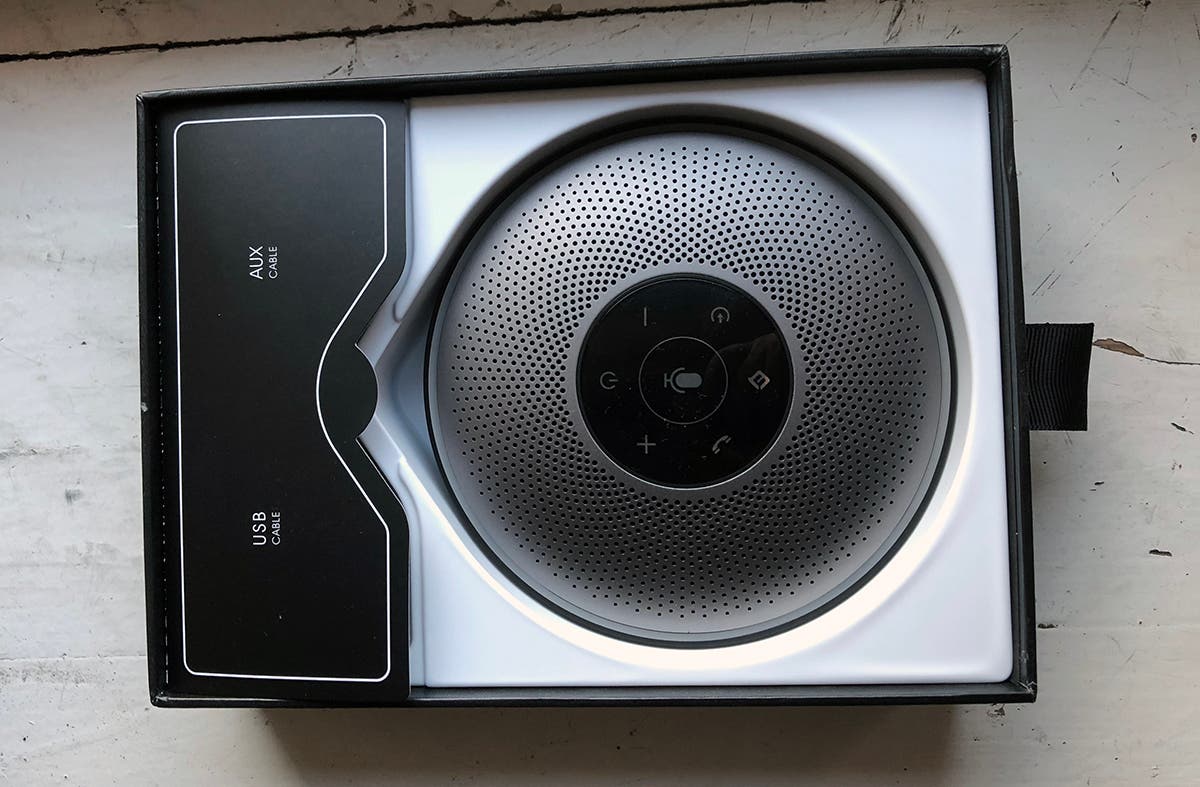 As we said, the keys are placed in the central part. The one on the top is the intelligent assistant button. On the opposite area, we can see the power on/off button. The input source switch button and the volume down button are on the left area. The answering/hanging up telephone button and the volume up button are on the right. There is also a status indicating light above the power button. Finally, the mute/recording button is in the very center. 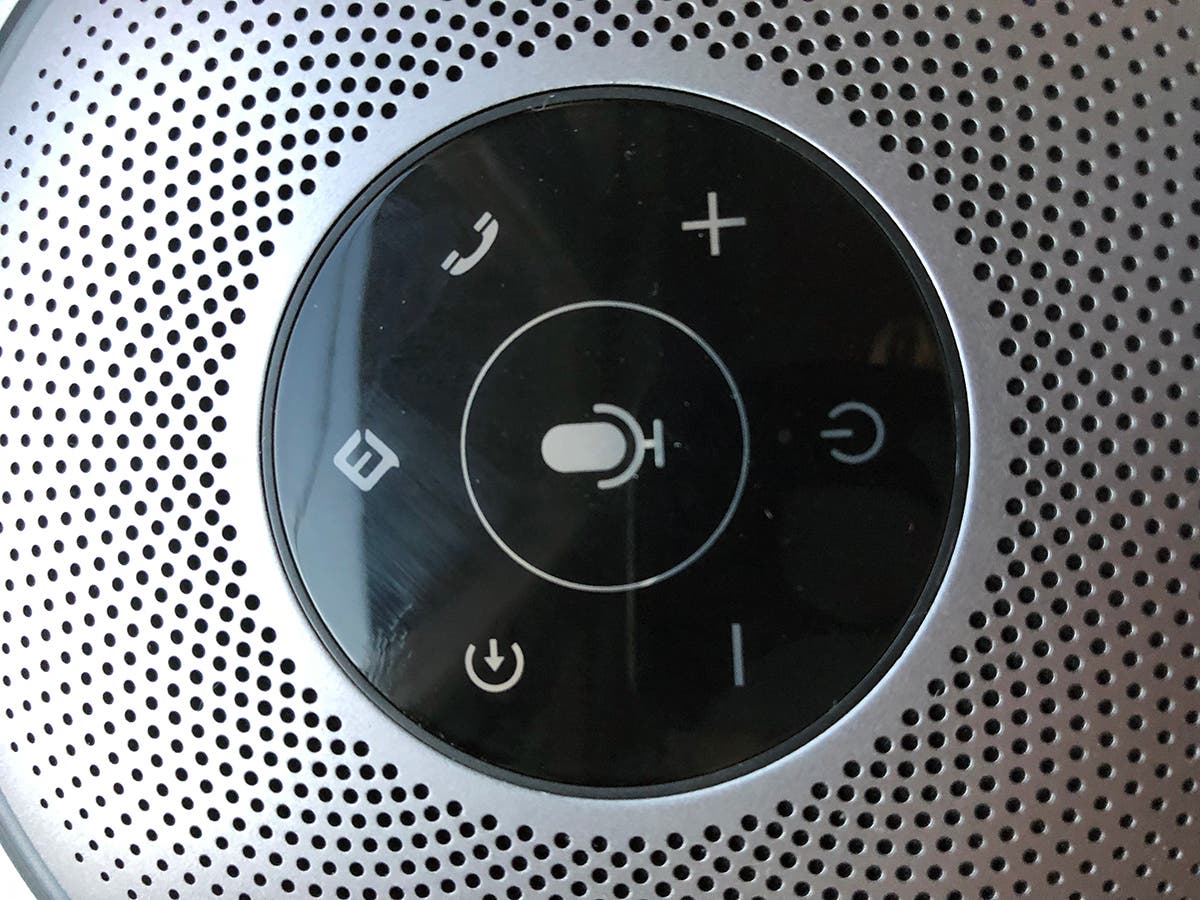 Apart from this, a few interfaces are placed on the side. They include a lock hole, an AUX audio input, a 3.5mm audio jack input, a micro USB port, and four microphone holes placed around the perimeter.

At last, as you can see, the speaker grill is on the top. So the sound comes not from the bottom. This also means you can put in on any surface without worrying the sound will be muffled. 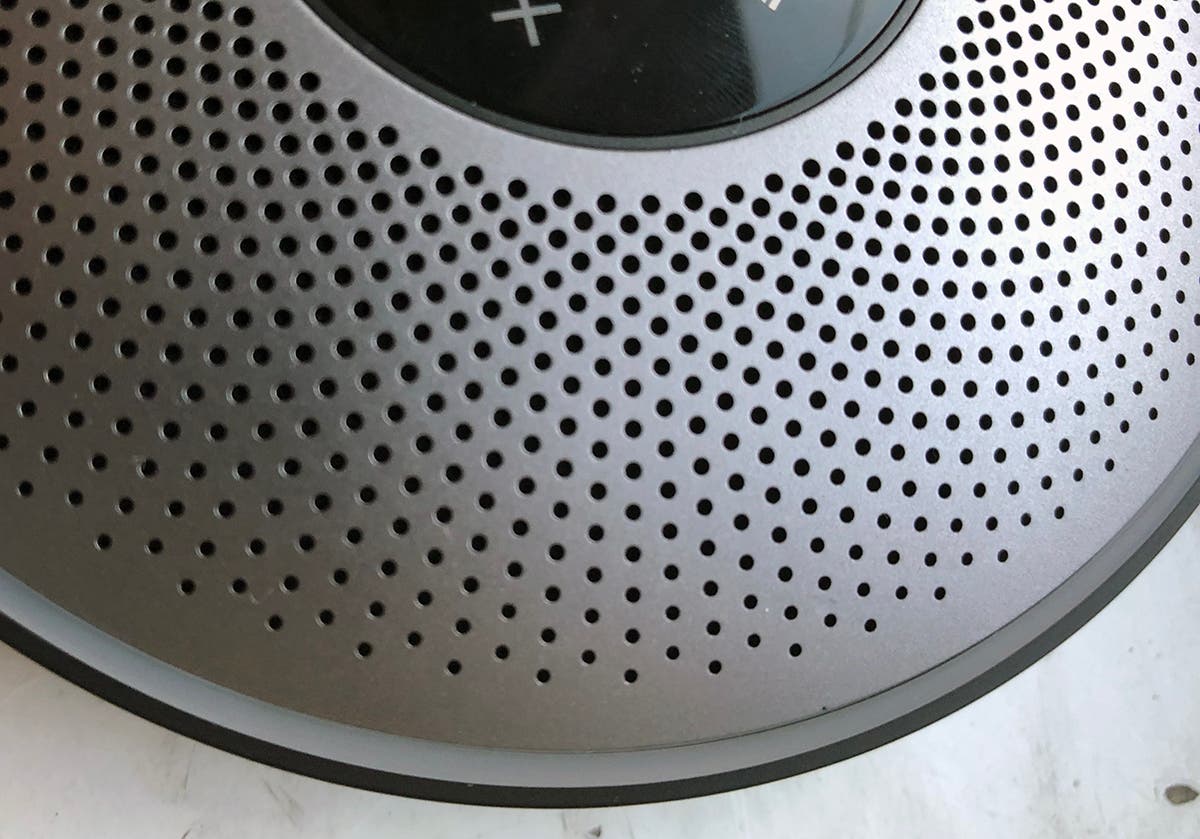 To turn it on, just press and keep the power button for three seconds. The speaker will light up. Like the previous model, there is a light strip around the edge. 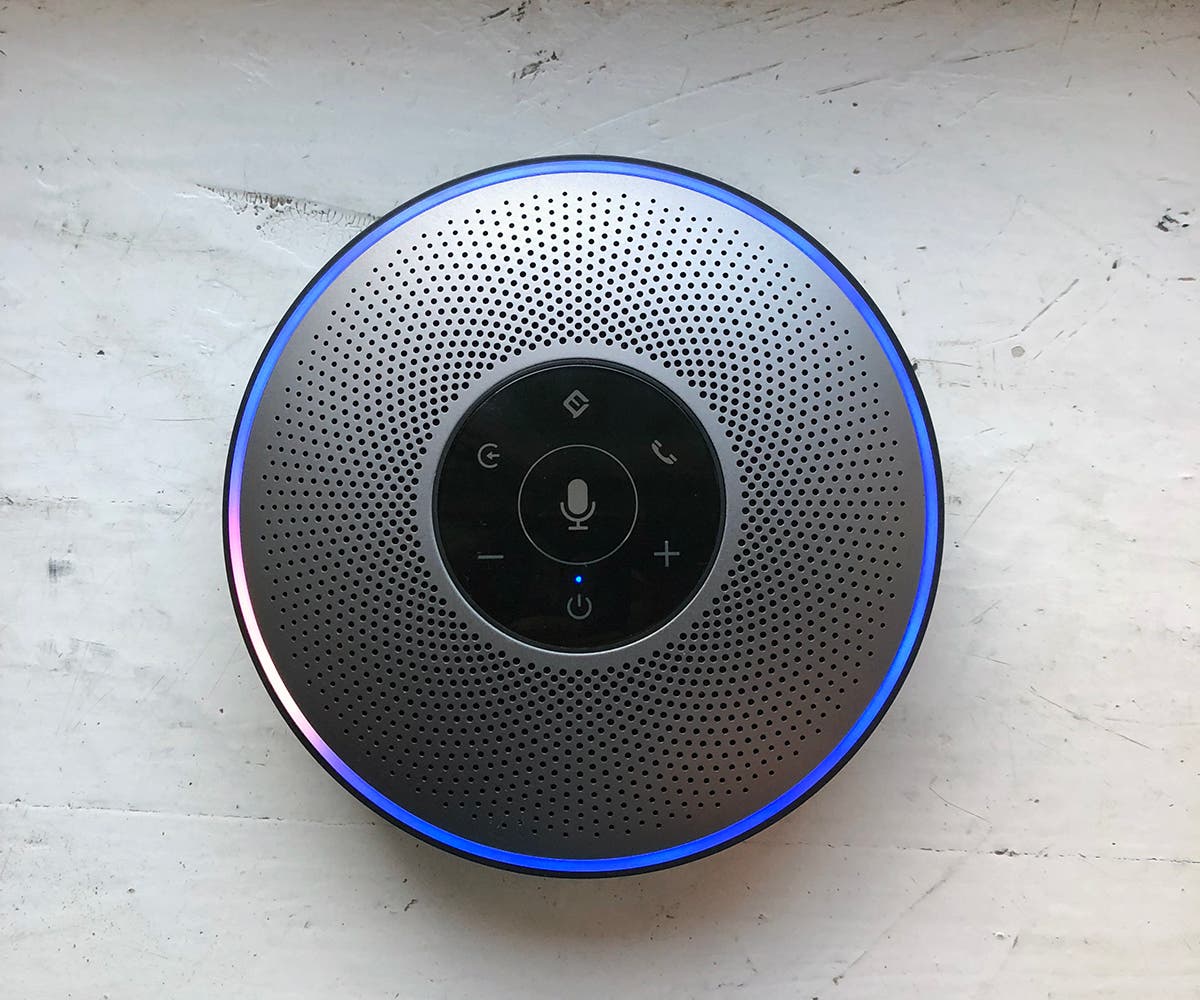 Bringing plug-and-play and multiple connection solutions, the eMeet speaker can connect in seconds with virtually any smart devices and integrates seamlessly with all communication platforms via Bluetooth, the AUX port, or via USB wire. Though it comes in a compact size, there is a built-in 2500mAh Li-ion battery, which allows users to easily move anywhere. So your conference calls will take place in any available places. By the way, the battery provides 12 hours of continuous talk-time and fully recharge in 3-4 hours.

You can check the status of the remaining power by short pressing the power button. If the power state is low, the light strip will be red. When everything is ok, it’s green. By the way, the OfficeCore M2 supports OTG charging. So you can use your smartphone or a power bank to charge it. The same can be done when connected to the laptop. 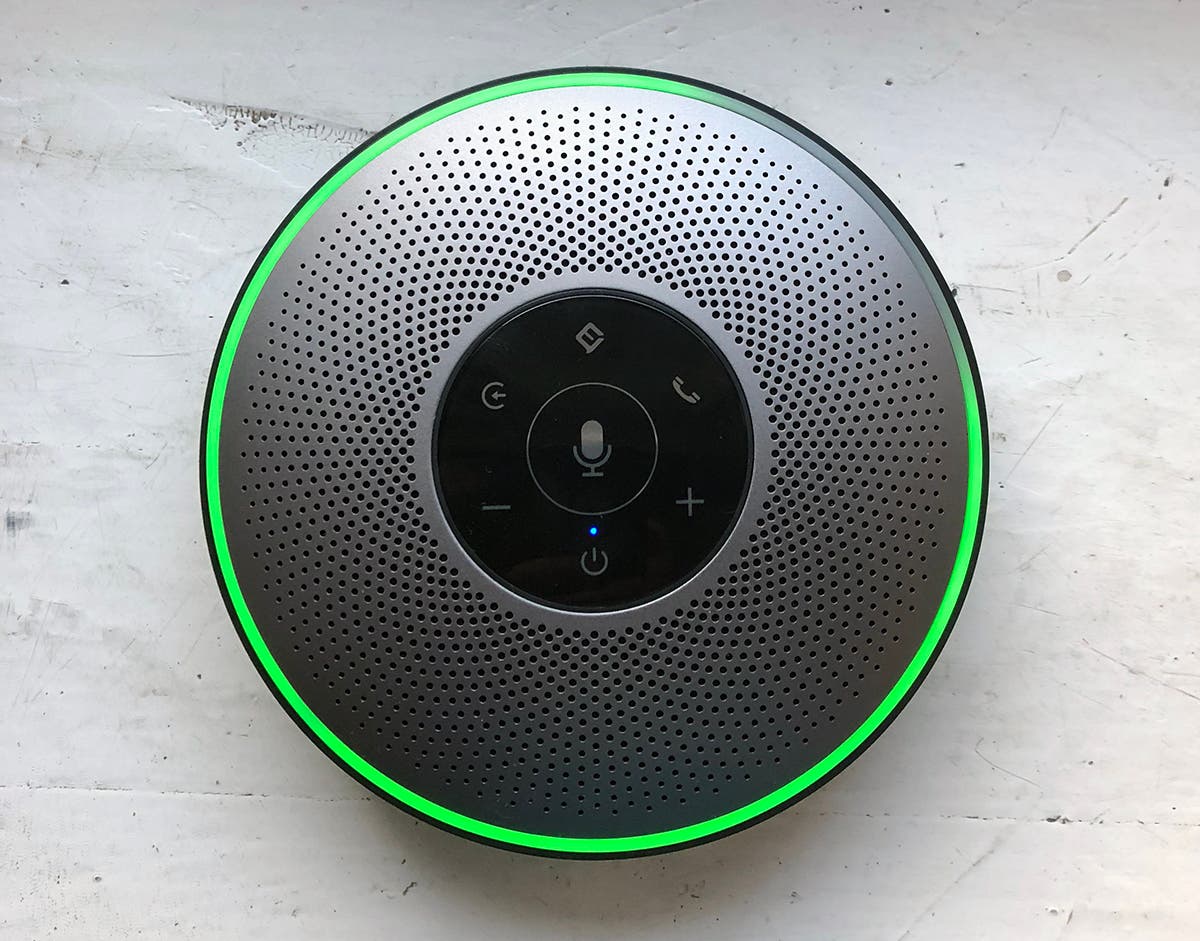 As we said, first, you can connect it to the computer or laptop via the USB cable. This is the most common thing you can do.

As we are dealing with a smart speaker that can be used for listening audio, there is a special AUX support. So you can use the corresponding cable to connect through the AUX interface.

But we guess you would like to use wireless technologies. Use the Bluetooth option to connect it to your phone. When it is paired, the indicator will stop blinking. By the way, it is packed with a Bluetooth 4.2 (Qualcomm CSR8670) module, compared to the 4.1 version of the Jabra 710. 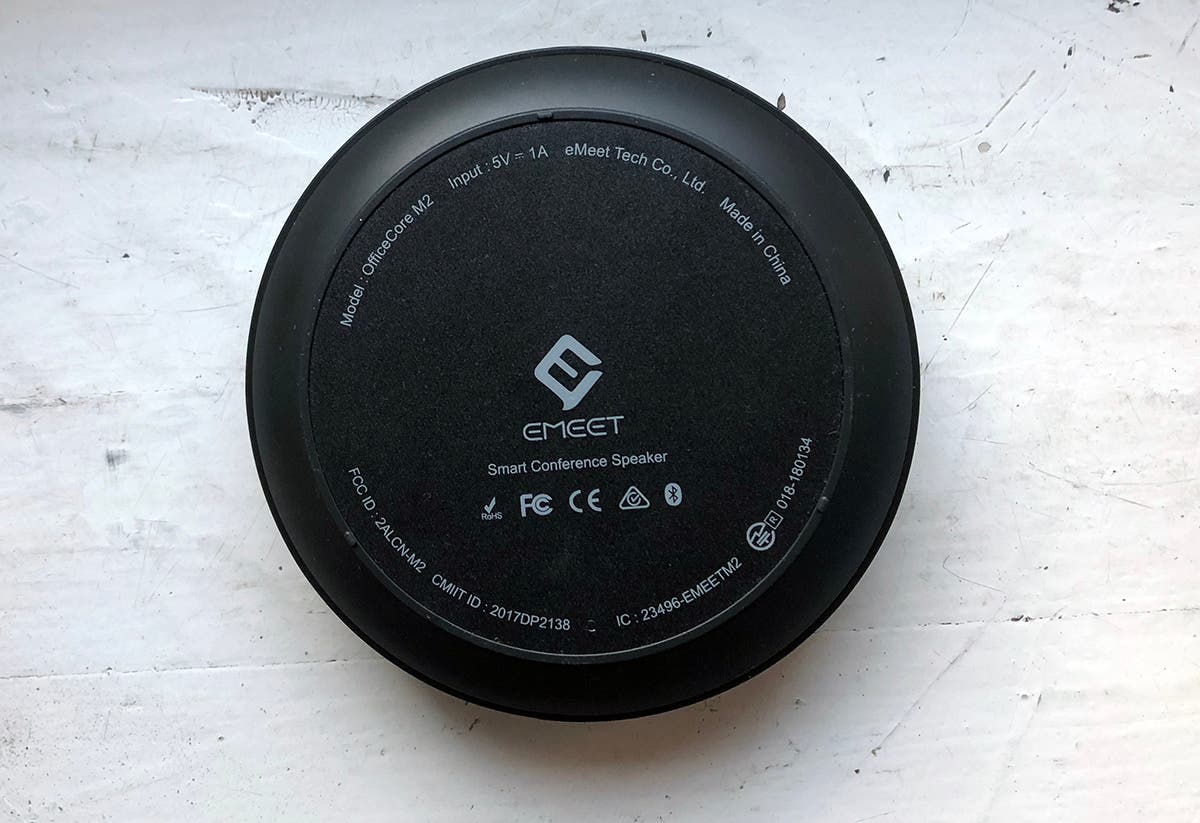 The eMeet OfficeCore M2 is packed with 4 high sensitive MEMS digital omnidirectional microphones that can catch the sound from all sides (360 degrees support). Many will think this number is not sufficient because the M1 comes with six speakers. The next group of users will be satisfied with this number when comparing with the Jabra’s 1 microphone. But the truth is we are dealing with a smart product. Unlike its competitors, this model is able to recognize the origin of the sound due to the intervention of AI. The OfficeCore M2 sports an intelligent LED lamp that indicates the direction from where the sound comes. So the one who is talking can know whether his/her voice is being picked up or not. These microphones accurately identify human voice positions to only capture vocal sound to a distance up to 33ft away with 12 people in one room (8-10 meters away (against the 3-5 meters of the Jabra and the 8 meters of OfficeCore M1)). So the users only hear what matters most.

As for the sound quality and the speaker, our protagonist comes with a sound output increased by 300% and the microphone pick-up distance increased by 150%. The AI algorithm for noise suppression and echo cancellation has increased by 200% while the full duplex calling effect increased by 180%. When turning the volume up or down a blue LED turns on and off step by step to indicate the volume level. In addition, there are LED indicators for the battery level as well as a mute indicator that turns the LED red whenever microphones are muted. 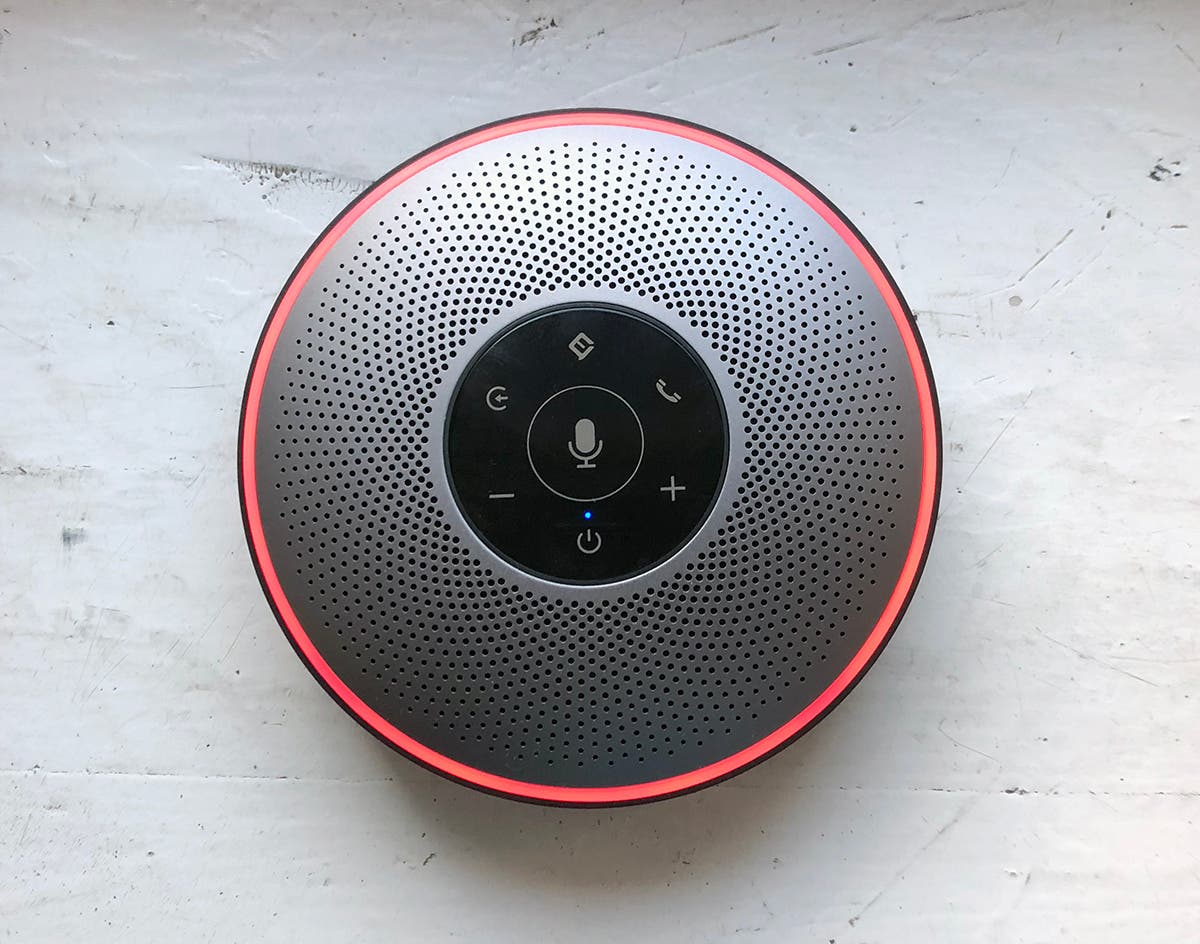 The call button’s operation is simple – press it when you want to answer the call and press again to hang up. But if you want to reject the call, press it for 3 seconds.

This conference speaker can count on Artificial Intelligence and a DNN-based VoiceIA algorithm (Deep Neural Network) that effectively eliminates background noise and deliver natural two-way conversations. So we can state the eMeet OfficeCore M2 is the most sophisticated, portable Bluetooth speakerphone available today.

The eMeet OfficeCore M2 is compatible with multiple software and platforms, including Skype, Avaya, Gizmo Project, Wechat, Google Gtalk and many others. Plus, it supports most digital assistants (Siri, Cortana or Google Now). So there is nothing comparable with the Jabra 710 that only supports Skype, Microsoft Lync, Cisco, Avaya, FaceTime and a few others.

You just have to tap the button on the top to call the voice assistant installed on your phone. Through voice commands, you can make phone calls, send messages, learn about weather and make other operations implemented through smart speakers.

At last, the M2 features multipoint connection that allows infinite expandability by linking together via wire as many M2 speakerphones as the user want to enjoy superior sound for the best voice collaboration, while the Jabra speaker can only be interfaced with another device and M1 does not support this function.

We have seen too many smart speakers with AI voice commands support, but the OfficeCore M2 is the first in its type. It’s a smart conference speaker, which simply means it should come with some additional features. As for our protagonist, it comes with four omnidirectional microphones understanding the origin of the sound. Thus, it not only can catch the sound from all sides but lights up to show the speaker’s voice is being picked up. Apart from this, you can use all most digital assistants (Siri, Cortana or Google Now) to do various operations via voice commands. And for all of these goodies, you have to pay a little more than two hundred dollars.

Next This Week on GizChina - Lenovo Z5 Flagship-Not, Honor Play with GPU Turbo and More