The Redmi line of phones is a very-well recognized series of Xiaomi alongside the Redmi Note line. And today, with the launch of the Redmi 6, it enters the sixth generation. Xiaomi’s president, Lin Bin recently teased a the frontal fascia of the mystery model prior to launch. But today, everything is revealed. So here it is.

The Redmi 6 comes with a 5.45-inch HD+ display and an 18:9 aspect ratio in contrast with last year’s 5.7-inch model. It also features an Helio P22, which in all likeliness, will make the Redmi 6 a very reliable and powerful performer. It comes with Android 8.1 Oreo mixed with MIUI 10.

On the camera side of things, the Redmi 6 boasts a dual camera system at the back with a 12MP + 5MP formation. This is quite similar to what we’ve seen on the Redmi S2. The front does have Face Unlock with a 5MP shooter.
The handset has a 3,000mAh battery and also supports 4G, VoLTE and dual SIMs.

Xiaomi’s other budget offering today is the Redmi 6A that is also powered by a MediaTek chip – the Helio A22. This is also another chip that is based on the 12nm process and is clocked at 2.0 GHz. The handset is virtually the same as the Redmi 6 except that it has a single 13MP primary camera lens at the back. If we talk about design, there is little that can separate the Redmi 6 from the Redmi 6A. We’ve uploaded some official images of the duo in the above gallery, do take a look.  The Redmi 6A is priced 699 Yuan for the 2GB + 16GB variant. Both phones will go on Sale in China from June 15 at 10AM 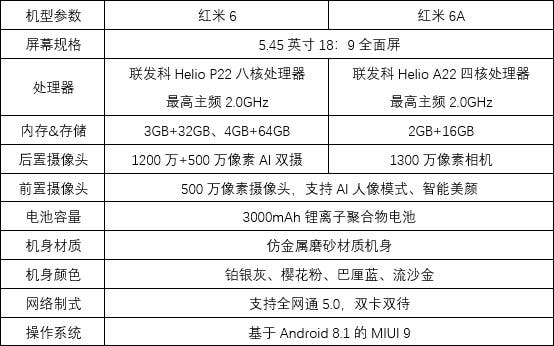 Next Report: Xiaomi to launch MediaTek-powered phones in India soon