The Mi Pad 3 is the sole Xiaomi tablet that launched way back in April 2017. Since then, we’ve heard of a refreshed Mi Pad 4 quite a few times, but we only now see a real piece of evidence as to its existence. And the clue comes from a very unusual source, for a Chinese product. The tablet from Xiaomi was spotted on FCC with model number M1806D9W by 91mobiles. However, they do add that the tablet also passed 3C certifciation in China.

As far as FCC listings are concerned, they don’t usually contribute much in way of specs, however, what they do is confirm the existence of a device very well. That is the case with the Mi Pad 4 as well. It is shown to have a 5V/2A charge rating. As per 3C, the Mi Pad 4 will have dual-band Wi-Fi and Bluetooth, again nothing unexpected here. The certification has been granted this week itself that hints at a close by launch of the new device. 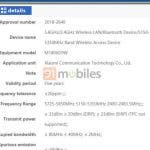 If previous leaks are any indication, the Mi Pad 4 will sport a thin bezel screen with 18:9 aspect ratio and Full-HD+ resolution. Also, it will host a powerful CPU in the form of the Snapdragon 660. Those are pretty decent specs in the tablet arena which is dominated by mediocre chips at best. The slate will also have a beefy 6,000mAh battery and a 13MP rear camera, if all this turns out to be true.

It is no doubt that interest in tablets has been fading for the last couple of years, however, Xiaomi’s tablets could be the exception when they come with such good specs and price.