Motorola is not only making a its first new Android One phone this year, it’s also making a first notched phone in its portfolio. We’re talking about the Motorola One Power whose press renders revealed the whole physical mould of the handset. If there were any doubts, now there are live images to strengthen those previous leaks.

Evidently, the phone looks anything but a Motorola device. Gone are the curved elegantly curved back edges, glass tops, and the circular protruding camera module on the rear. All this has been a prominent feature of Moto phones this year. Instead, the Motorola One Power looks more like the Asus ZenFone Max Pro M1. If not everything, at least the Moto dimple is preserved on top of the fingerprint reader.

As for the bottom, there’s USB Type-C and two speaker grills one of which is usually a speaker. Talking about specs, one thing’s for sure, the Motorola One Power will come with the latest Android version. No points for guessing this one. The rear dual camera is comprised of a 16MP sensor and a 5MP secondary lens. The notch houses a single 8MP selfie taker. With current info, it can be said that the Motorola One Power will stock up a big 3,780mAh battery. For more info on specs, refer the image below. 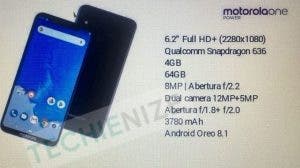 Lastly, this is a prototype we’re looking at, says the source. Given that we’re still not sure when Motorola will launch the device, it could be subject to major or minor changes. And if this device is supposed to succeed Motorola’s last Android One project, the Moto X4, then the release could be in July.