A set of reports indicate that Sony is preparing a big launch for the IFA 2018. According to the rumors, the smartphone that the Japanese are preparing for this Summer launch is the Xperia XZ3, however, a new fresh report indicates that the company could be preparing a successor for the Xperia XZ2 Premium which debuted two months ago.

While the standard variant of Xperia XZ3 has appeared with an H8416 model number, the new Xperia XZ3 Premium was assigned with the H8614 and boasts some neat upgrades when compared with its regular variant. First of all, the smartphone could come equipped with a 4K resolution – One of the biggest marks of Xperia XZ Premium series, However, precise, the model in question has an 18:9 display and 3840×1920 pixels of resolution. That’s a pretty weird combination, considering that a 4K+ display should have 4320×2160 pixels of resolution. Regardless of this fact, the information towards the Xperia XZ3 Premium also reveals that the smartphone should come with Android 9.0 P just out-of-the-box. The upcoming Android release should be dropped for all Pixel smartphones, towards the end of August, until then, most of the OEMs will already have access to the final version of P release. So, wouldn’t be impossible to see a smartphone with the latest Google’s software being announced in September. 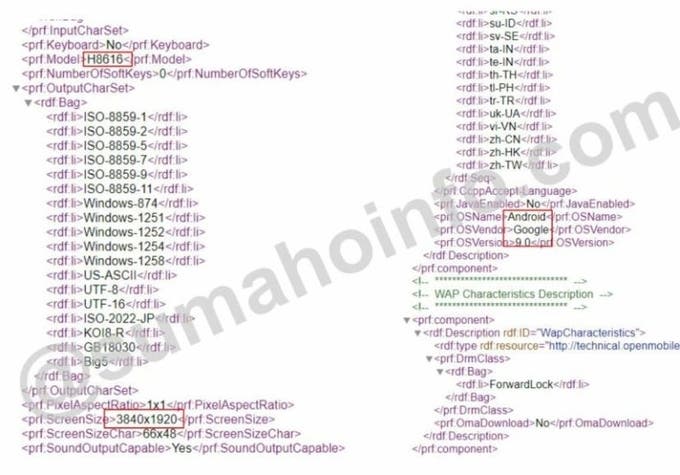 The smartphone should be powered by the Snapdragon 845, no surprise here, however, the company might add the amount of 6GB of RAM for multi-tasking purposes. The storage should receive a major bump to 128GB, with support for external microSD also being a possibility. On the camera department, no surprises, the company might employ the same 19MP + 12MP combination that is present on its predecessor. On the front side, selfie-lovers will be pleasured with a 13MP snapper.

Despite the rumors, the launch date of Xperia XZ2 Premium could delay the arrival of this upcoming Sony Premium smartphone to November. Well, the XZ2 Premium isn’t available for pre-sales in some countries, launching a successor at this time would potentially cannibalize the sales of the Xperia XZ2 Premium. Considering the fact that the Xperia XZ3 is expected to come in September, Sony can announce the Premium variant alongside it but push forward the sales of this model to some months ahead.

Next BlackBerry KEY2 gets US release date, pre-orders for the QUERTY smartphone to start next week