Today, Homecare, another Chinese brand announced new smartphones in face of the AICALL V9 and AICALL S9. They are focusing on AI and a unique six-key interactive technology. While this brand is unfamiliar to us, Homecare began its way in 2014. It is a national high-tech enterprise and has more than 300 national research and development patents. It is also in a good cooperation with top suppliers such as Qualcomm. So we can expect the newly announced models to provide a good performance.

The AICALL V9 uses a slim all-metal body design, with a thickness of only 7.5 mm, a ‘Mercury arc’ back, a rounded transition on both sides, an aviation-grade aluminum alloy with a CNC crafting and 130 other processes, a 205 sandblasted surface, an exquisite R angle, and so on.

Previously, the Homecare phones had the One Finger Zen five-button interactive technology. Now combined with the back fingerprint button, it has been upgraded to the One Finger Zen 2.0 six-button interactive technology. Six functions can be easily operated with one key (phone unlock in 0.1s, camera app, Back, Homescreen, etc.).

As for the photographing, the AICALL V9 is packed with a 16MP + 20MP AI ultra-sensitive dual-camera. The former camera uses the Sony IMX398 sensor, while the second camera comes with the IMX350 sensor. The camera uses a 1.4-micron large pixel size, a f/1.7 large aperture, a 6P sapphire lens, and supports Dual PD dual-core focus. Thanks to the Rainbow software professional algorithm, it supports for Portrait mode 3.0, human face algorithm optimization, while upgrading portrait background blur algorithm and dark light enhancement algorithm. As for AI, the rear camera supports AI camera scene recognition, including environment, scenery, plants, and people/items.

On the front, it carries the Sony’s 20-megapixel (f/2.0) camera with AI Maker that can match beauty programs based on gender, skin texture, and ambient light, and differentiate facial features to achieve a three-dimensional beauty. Of course, it also supports AI face unlocking. 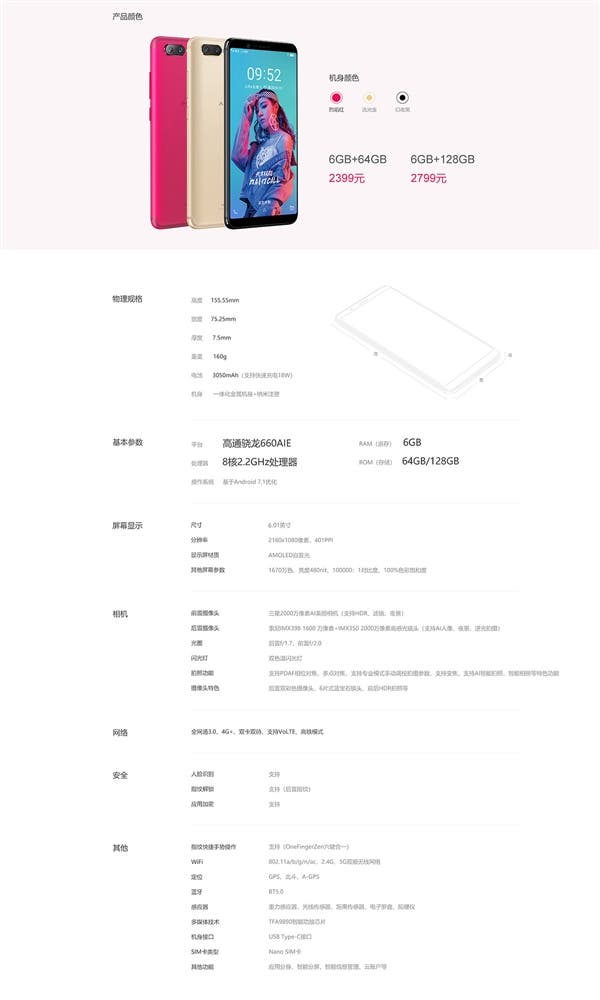 Next Nokia 8110 4G gets TENAA's nodding, could launch in China soon