Tomorrow, the fourth generation Xiaomi Mi Pad 4 will debut. This tablet will release with another much-awaited model, the Xiaomi Redmi 6 Pro. But if the latter is the modified version of the current Redmi 6 phones, the Mi Pad 4 is overhauled in comparison to the Mi Pad 3. Today, we got the fifth pre-heating poster of the upcoming tablet. And it disclosed the last key feature of Xiaomi’s new tablet ahead of launch. Honestly, this poster confirms the rumor heard earlier. It refers to the battery. 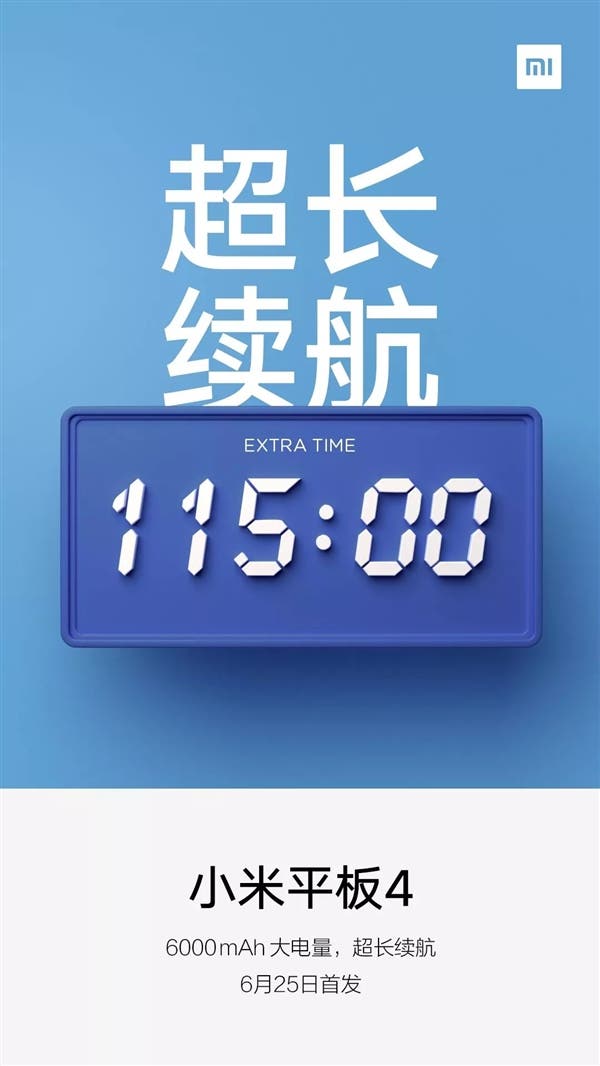 The poster also shows an ‘EXTRA TIME 115:00.’ This simply means the Xiaomi Mi Pad 4’s battery will provide additional 115 minutes of endurance when compared to the previous generation model. So how it could happen? The only reasonable explanation that comes to mind is the resolution of the Mi Pad 4 will be Full HD+ instead of 2K. Actually, there has been no information concerning the screen resolution. We only know it will come with an unusual 16:10 aspect ratio.

By the way, we know the hardware has been improved a lot. The Xiaomi Mi Pad 3 was packed with a MediaTek MT8176 processor based on a TSMC 28nm HPM process node, using two A72 + 4 A53 six-core design, and clocked up to 2.1GHz. The Mi Pad 4 is packed with a Snapdragon 660 chip, which uses a 14nm process node, a Kryo 260 octa-core CPU at the highest frequency of 2.2GHz. We know the SND660 is the best mid-range chip available on the market, which also offers an optimized power consumption. So maybe all the praises should go to it.