Xiaomi officially unveiled the Redmi 6 Pro and Mi Pad 4 today at an official event in China. However, there’s barely anything new we’ll find out about the device. As it turns out, even the pricing/versions of the Redmi 6 Pro were leaked last night. Both the new products were listed on Xioami’s portal resulting in a complete dress down before launch. Also, some partial pricing details of the Mi Pad 4 were also outed. But now, we have official pricing details with all the specifications of the Mi Pad 4. 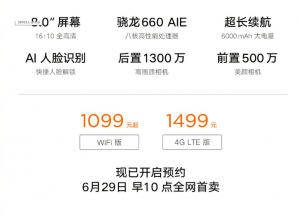 As it is, specs are already history. Xiaomi itself spilled the beans on the Snapdragon 660 chip being inside the Mi Pad 4 through an official teaser. The tab has a tad bit bigger screen at 8.0-inches and the battery is also 6,000mAh. The display should likely bear Full-HD+ resolution with a 16:10 aspect ratio. The rear has a powerful 13MP camera and the front selfie shooter is a 5MP lens. It runs Android 8.1 with MIUI 9, so we’re still not getting MIUI 10, not at first boot at least. In terms of connectivity, we’re getting a 3.5mm audio jack, 4G VoLTE, and a MicroSD card slot as well. Since it doesn’t have a fingerprint reader Xiaomi has also recently teased the tablet to feature face unlock out of the box. Sales start in China on June 29 at 10 AM.