On June 28th, Huawei Pollen Club will celebrate its 6th anniversary and the company has experienced almost 100% increase in its Pollen community growing from 40 million last year to 70 million this year. Today, Yu Chengdong, CEO of Huawei’s consumer business, released a video on Weibo to congratulate the Pollen Club for its 6th anniversary and thanked Huawei for its support and help during its 6 years of existence. 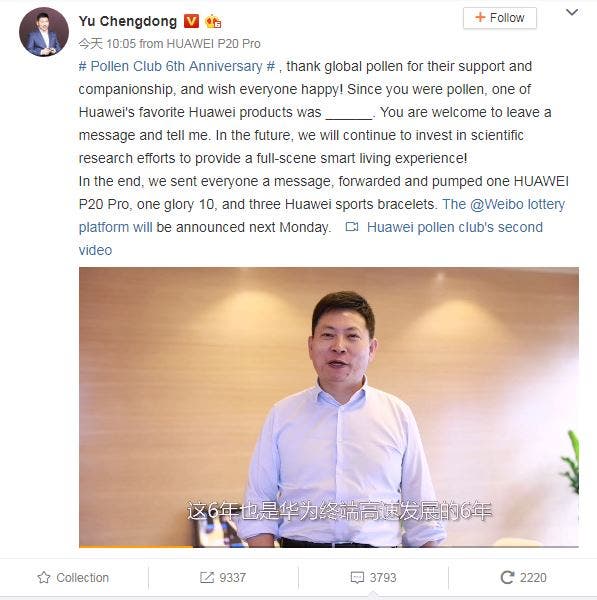 Yu Chengdong said that within this period, there has been a rapid development of Huawei’s terminals. Huawei’s mobile phone business has a huge chunk of China’s market share and it is currently ranked third in the world. In addition, he also disclosed that Huawei’s smartphone shipments this year will be close to 200 million units, which should project the company to the second position in the world. Last year, Huawei (including Honor) smartphones shipped 153 million units, ranking third globally and it continues to lead the Chinese market.

Yu Chengdong called on the Pollen Club members to suggests what they will like to see from the company and emphasized that Huawei will continue to increase investment in innovation, Research, and Development (R&D). Huawei’s strategy is to provide global consumers with a full range of smart living devices, not only smartphones but also tablets, PCs, smart wear, sports health devices, smart home, smart car networking solutions and so on.

Next Mi A2 finally appears at the NCC confirming its existence