ZTE’s future is uncertain, after the ban imposed by the US government, the Chinese company is prohibited from sourcing hardware, components and even software from the Uncle Sam’s country. Despite the fact, that both the US government and the manufacturers are negotiating a way to drop the ban that has forced ZTE to close its business, no decision has been made. In the middle of this sea of uncertainties, a new teaser leaked today revealing an unreleased smartphone from ZTE Nubia series, with two screens, one placed in the front, and the other on the rear, in the perfect “YotaPhone wannabe” style. 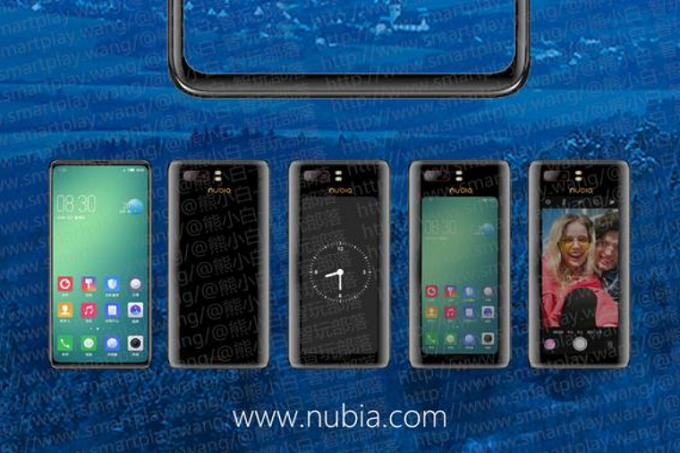 This smartphone would be called ZTE Nubia Z18S and would not bring a selfie camera, in favor of a single dual-camera setup on the rear. The secondary rear display would come with a lower resolution and between the advantages of having it, the user could take selfies with the rear camera with the secondary display acting as orientation. The leaked teaser shows the secondary panel with an Analog Clock, HomeScreen with some applications, and a Photography preview.

Adding the secondary display would be perfect for those who love taking selfies, but also want a bezel-less view, after all, not everyone is dying in love with the notch. To be honest, there is huge criticism towards this new trend. However, don’t grow in expectations since there are also indications that this concept can just be a prototype and the Z18S could, in fact, sport a small circular notch in the front to place the selfie camera, just like the Essential Phone. At this moment, it is not possible to confirm if both devices are the same ZTE Nubia Z18S or different variants.

Currently, is impossible to estimate if this smartphone will be launched, one time that ZTE is left without a source for its chipsets and component, and the Snapdragon 845 usage would be impossible due to the Qualcomm’s homeland ban. We just hope that both the US government and ZTE found a solution to this problem that forced the company to close its doors, leaving thousands unemployed.