According to Japanese media site Sumahoinfo, a new Sony mysterious machine just showed up on GeekBench. The new model is name coded H8526, which according to Sony’s previous naming convention could suggest that this device is very likely going to be part of their next generation flagships a.k.a. the Xperia XZ3 lineup.

In the past, the XZ2 series models were indeed named H81XX~H83XX, thus we can quite easily conclude that the Sony model coded H84XX is probably an Xperia XZ3, meanwhile the H85XX might be a XZ3 Pro or Premium. 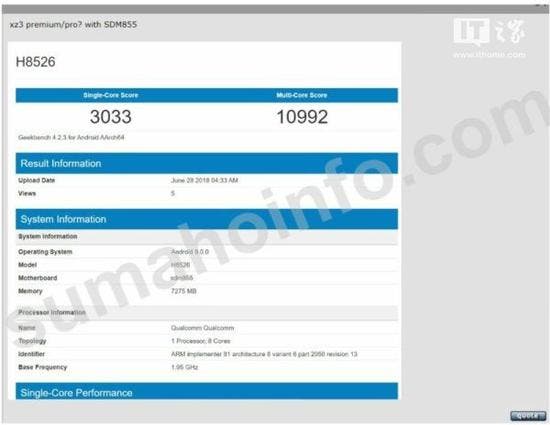 This brings a question: are we looking at Qualcomm’s next high-end processor? If the screenshot is legit, then the device is definitely equipped with a Snapdragon 855 chipset, along with 8GB of RAM, possibly making it the best specc’ed smartphone to hit the market any time soon.

There are also rumors that the phone will be the first mobile phone to support 5G connectivity. Considering that the IFA conference is approaching, we might be really close to its unveiling, or at least we hope so!