It has been a very difficult time for Intel recently. The lack of 10nm process chips has caused serious complaints. Perhaps in order to calm consumers’ dissatisfaction with Intel, the manufacturer provides some news of the ninth generation Core processors. 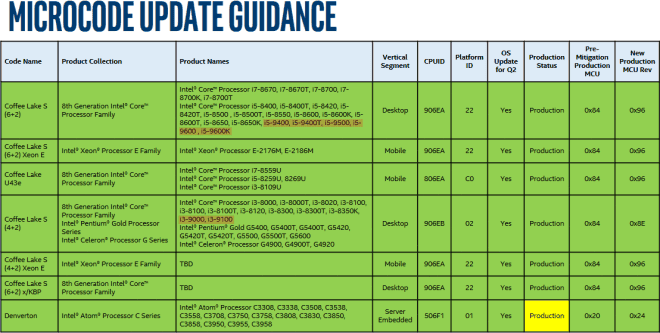 Specifically, Intel’s document speaks of five Core i5 chips, which come with six cores. In addition, two models of the Core i3 series are called, which come with four cores. There is no information about the i7 series that people care about, but according to previous news, this generation of consumer products will sport up to 8 cores and 16 threads. However, they will still use the 14nm manufacturing process.

Intel’s document also lists a variety of current 8000 series processors. It is clear that it is becoming increasingly difficult for consumers to see through the marketing forest of the US chip company, as various other chips are being marketed as the 8th generation of Intel Core CPUs.

The document suggests the new chips will once again be just a refreshed version of the ‘Coffee Lake’ family. Many had hoped Intel would soon begin to produce chips in the ‘10nm +’ scale, but apparently, nothing will come of it. According to other reports, Intel will not be able to produce in 10-nanometer scale until 2019. Not surprisingly, this generation will be a typical ‘squeezing toothpaste’ product. However, considering that it is for the delay of the new technology, the price should be low.