HMD Global launched the Nokia X6, its first response to the trendy display notch earlier in May. While the device could be heading to other countries out of China in a few days time, there have been talks of the company announcing its second smartphone with the irregular display notch. There were unconfirmed reports just a while ago that the device in question – the Nokia X5 or the Nokia 5.1 Plus would be unveiled on July 11, and now, the brand has released a teaser that supports that claim.

A teaser seen on Nokia mobile’s official Weibo page suggest the company would be releasing a new smartphone in 3 days time, which coincides with the July 11th date earlier rumored for the Nokia X5 release. The teaser never mentioned any specific product name, but did indicate the new phone would be from the X series,  given the previous report, however, our best guess is that it could be the Nokia X5.

As noted by Nokiamobs, a couple of online retailers like JD.com, Sunning and Tmall are also teasing a similar product launch with a hint that suggests the device could go on pre-order/sales soon after it is unveiled. 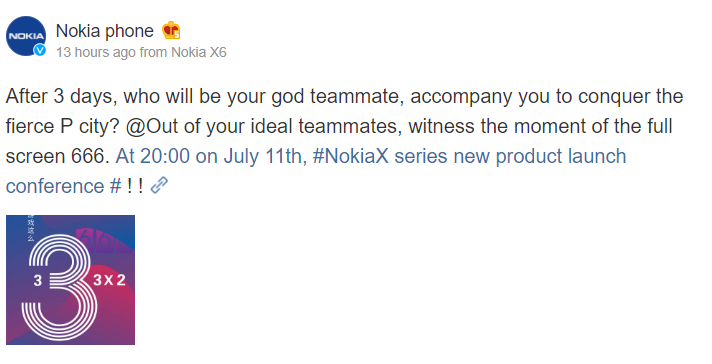 As a reminder, the Nokia X5 is tipped to launch internationally as the Nokia 5.1 plus and to recap on the specs, the device is tipped to feature a notched 5.8inch HD+ display with 720 x 1520 pixels resolution with a 2GHz octa-core processor coupled with up to 4GB RAM under the hood. Pricing is expected to start at CNY 799 ($120) for the base variant, while it will scale up to  CNY 999 ($150) for the higher variant with 4GB RAM. See the full Nokia X5 specs and design as revealed by TENAA here.

Previous Nokia X5, aka Nokia 5.1 plus rumored to be launched on July 11