The Honor Note 10 has bee officially teased today with a poster on China’s micro-blogging platform today. Prior to this, Honor’s CEO had confirmed that the handset would launch soon. The Honor Note 10 comes as a successor to the Honor Note 8 and the company said that they have been preparing for two years for the launch of the Note 10.

As for the teaser itself, we’re not treated to a sneak peek of anything really. The only takeaway from the teaser is that it is coming soon. The word “Note 10” also makes it clear that this is a teaser of the handset, not some other product. 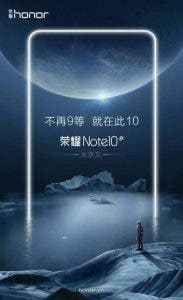 It will likely feature dual rear cameras with AI features, similar to the Honor 10. We should know more details when the phone gets certified, and the official release date sometime next week.

This all official talk. In the real of leaks, we know much more. The Honor Note 10 leaked in the flesh recently in a stunning Silver colour design, however, we were only able to glimpse the rear of the handset. It had dual cameras, and also a fingerprint sensor at the back, and that’s pretty much it.

As for specs, the Honor Note 10 will be a gargantuan device set to clash heads with the Mi Max 3 as it is rumoured to feature a 6.9-inch AMOLED display. This is after reports that the phone maker has successfully obtained AMOLED panels from Samsung recently. It could feature a Kirin 970 SoC, but that is not certain. The big screen should also accompany a huge battery, probably something around 6,000mAh capacity.

Next Razer Phone is coming to India, reiterates Razer CEO on Twitter