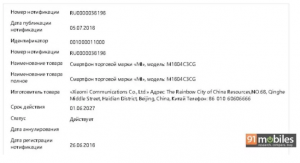 However, the same model number – M1804C3CG – did pass the FCC some time ago. From that encounter, we’re able to glean some little tidbits about the device. The FCC listing described this Xiaomi device to be running MIUI 9 out of the box. It also revealed that there will be two variants of the same – 3GB RAM + 32GB storage and 4GB RAM + 64GB. Judging from the MIUI 9 version and 3GB of RAM, we’re inclined to say this won’t be a high-end handset. Some suggest the handset to be a basic variant of the Mi A2 which has escaped any leaks thus far.

Meanwhile, Xiaomi is set to launch a global product soon and reports allege the handset will be a Mi A2 prepped first for Spain. What do you think about the new handset? Any ideas on what this device could be? Share your thoughts with us below.

Next Xiaomi Redmi 6A gets 3GB+32GB storage variant, to go on sale July 10