Today, July 11th, Chinese online mall – Jingdong – released on their website an appointment for all Honor fans who are waiting for the Note 10 to be unveiled. Sadly, the website does not display a price tag, so that’s still a secret.

What’s known though, is the launch date for Honor’s phablet, that is July 25th at 23:59 China Time, which means that on July 26th we’ll know everything about the phone.

The Honor Note 10 is expected to pack a powerful Huawei Kirin 970 processor, for those who aren’t aware, this is Huawei’s flagship chip launched last year, based on 10nm process technology and consists of Cortex A73×4+Cortex A53×4, along with a Mali-G72 MP12 GPU. The flagship CPU will be paired with 6GB of RAM and 128GB of internal storage. 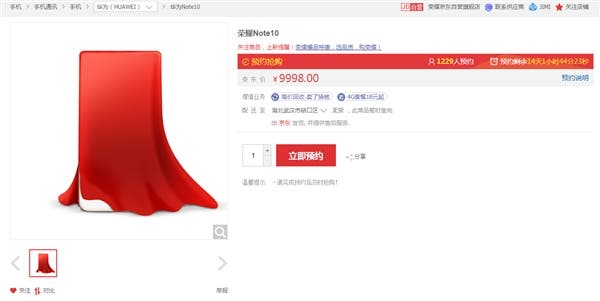 It is worth mentioning that as a member of the Honor Note series, the Note 10 is expected to feature a large battery to keep up the good name of the Note lineup.

Next Sharp to bring Sharp Aquos B10, C10 and Sharp Aquos D10 phones to the EU, specs leak out