The Huawei Nova 3 is set for an official reveal on July 18 along with the Talkband B5 in China. However, the handset has quietly gone up for pre-order today on Vmall thus revealing everything about the phone except its official price. Moreover, an extensive leak also showcased every aspect of the phone including official renders and there were a few surprises.

The Huawei Nova 3 looks a lot like the P20 series but it comes with interesting new colours – Purple, Black, Blue and Gold. The top-notch seems to be a bit wider than previous phones but otherwise, it is the same design. 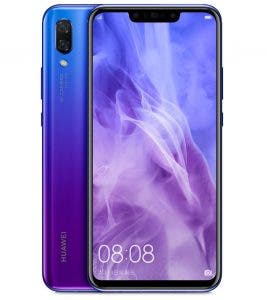 The most surprising reveal is that the handset packs the flagship Kirin 970 instead of the presumed timid Kirin 659. That propels it into flagship territory. Also, it comes ready with GPU Turbo for quality gaming times. The front is dominated by the 6.3-inch FHD+ 19:5:9 aspect ratio curved glass display that runs Android 8.1 Oreo with EMUI 8.2. There’s 6GB of RAM and buyers get to choose from 64GB/128GB of storage. And yes, there’s support for micro SD.

The cameras of the Huawei Nova 3 are not a slouch either. The front rocks a 24MP + 2MP combo and the rear also has a theoretically better 16MP sensor aided by a 24MP lens. Huawei has tossed in the regular AI stuff like scene recognition, 3D Qmoji, face unlock, beauty mode and the like.

The Nova 3 has a big 3,750mAh battery that supports fast charge. Pre-orders are live now on Vmall while sales will start on July 20.

Previous Huawei MediaPad M5 to get GPU Turbo with next update

Next Huawei TalkBand B5 specs unveiled, officially on pre-sale on Vmall