Probably, the Sony Xperia XZ2 Premium is not expected to win the world, but as the latest chart of AnTuTu shows, its predecessor has the highest customers’ satisfaction rate. Thus, there is every chance for this new model to become an ‘unrecognized king’ once again. Many have been thinking its American pricing of $999.99 won’t let the XZ2 Premium to sell well. But who says this handset will be offered in the US only? Today, on July 11, Sony’s latest flagship officially went on pre-sale in China via Jingdong at a price tag of 5699 yuan ($855), which is way lower than the US price. In comparison to the Taiwanese pricing of NT$28,990 ($951), it looks quite amazing. 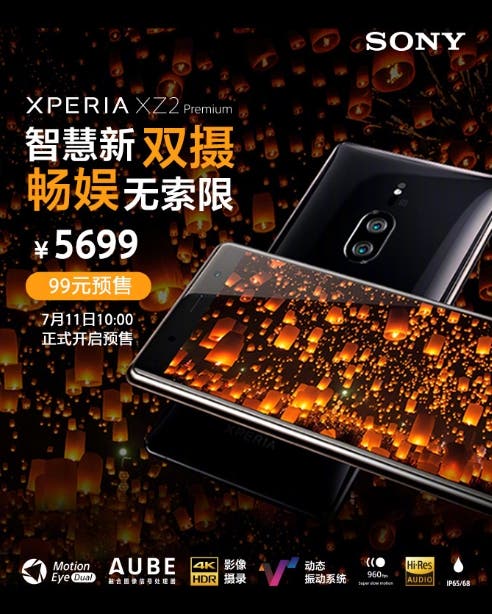 The Sony Xperia XZ2 Premium is a true flagship with a number of outstanding features. Of course, its selling point is the 5.8-inch 4K resolution HDR screen. It is the world’s first Snapdragon 845 flagship phone with a 4K screen. The screen comes with X-Reality mobile image engine and BRAVIA TV technology. Apart from the SND845, there is also a 6GB RAM, a 64GB ROM, 3450mAh battery, and it is waterproof and dustproof (IP68).

Sony phones have been always known for not only good viewing experience but for great camera performance as well. The Sony Xperia XZ2 Premium is no exception. It sports a 19MP + 12MP dual-camera on the back as well as a 13MP shooter on the front. The main lens of the rear camera uses an aperture of f/1.8, while the second lens comes with an aperture of f/1.6). The camera also integrates an AUBE real-time image fusion processing chip. The main camera is equipped with a 1/2.3 Exmor RS motion sensor and supports 960 frames of super slow motion video capture. But this handset is powerful not only in terms of hardware only but also in terms of software upgrades, adding depth of field camera effects and professional black and white effect. The main dual lenses on the back support the ultra-high sensitivity of ISO 51200 and ISO 12800. It challenges the limits of human vision under low ambient light sources, and it is also the first time to enable the LAA connection function on smartphones.

Next If Apple Enters AR Industry, It May Add $11 Billion In Revenue