The tech manufacturers are looking for new opportunities and technologies to win more customers’ hearts … and earn more. Apple is no exception. Augmented reality (AR) could be another competitive advantage for the Cupertino-based company and bring $8 billion in revenue. At least, Merrill Lynch, an analyst at Bank of America thinks so.

Apple has already managed to demonstrate the finished Apple Park at the Apple Park Visitor Center on November 17, 2017. So all these assumptions concerning Apple’s entrance into the AR industry are not around the corner. Moreover, it’s predicted the company’s move into AR could boost iPhone and App Store sales. 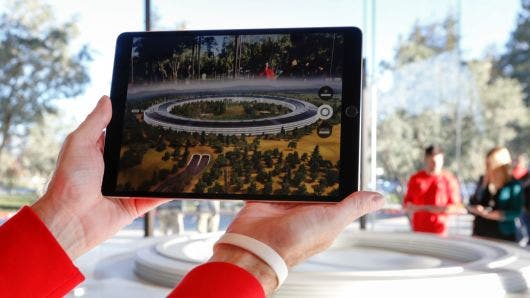 “We think AR apps will command a price premium,” Wamsi Mohan, senior equity research analyst at Bank of America Merrill Lynch wrote in a note to clients Tuesday. “We reiterate our Buy on strong capital returns, continued strong growth in Services revenues and AR providing yet another competitive advantage.”

As you know, AR puts virtual objects in the real world using a phone or another mobile device such as a tablet. As for Apple, it could be the iPhone or the iPad. One of the best implementations was Nintendo’s 2016 Pokemon Go video game. We are sure most of you were obsessed with it. If you remember, the game let users chase video game characters projected on their phone screens throughout city streets and other public areas.

This simply means, if Apple decides to enter the AR market, it can get an additional $6 billion to $8 billion revenue from now until 2020 with $1 billion of that coming from AR apps and the rest coming from increased iPhone sales due to the new technology. But if the tech giant comes in with an AR eyewear, the revenue can be much higher of $11 billion, said Wamsi Mohan.

Actually, more than 1 billion Apple devices are enabled for AR apps. So as the analyst said, it makes iOS a logical and “extremely attractive” option for those developers. But we shouldn’t take AR as an opportunity for gaming only. The BofAML analyst highlighted retailers such as Lowes and Home Depot already using AR to help customers picture how countertops, floors, blinds or paint might look in their homes before buying them. Plus, the AR technology can be used to experience with hotels and travel staff.

Next Xiaomi's Electric Scooters Are Quite Popular in Silicon Valley