Currently, it’s more important that the smartphone supports a fast charging option rather than come in with a large capacity battery. That’s why all major players in this niche offer their own technology for fast charging. The OPPO’s SuperVOOC 50W Super Flash Charger (10V/5A) already appeared on the Find X. So Huawei and other big brands should accelerate the process of bringing similar technologies to their products. Actually, Huawei has announced something like that a couple of years ago. Its 40W (5V/8A) charging technology was announced along with the Honor Magic. But till today, we haven’t seen it to come on any smartphone. This is going to be fixed soon. 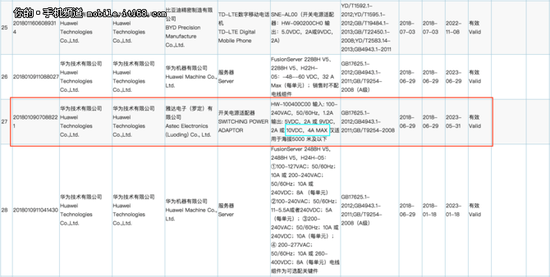 According to the reports, Huawei‘s new power adapter with a model number of HW-100400C00 has been approved and got a 3C certification. As we can see in the documents, it is manufactured by Yada Electronics Co. Ltd. In comparison to the previous model, this one supports the highest output power of 10V/4A. This means that the maximum charging power will reach 40W, which is much faster than the 22W fast charging on the Huawei P20-series smartphones.

It’s rumored this fast charging technology will be available on the Honor Magic 2, which is going to release later this year. But if believing in Weibo discoveries, it will come to the Huawei Mate 20 first. Thus, we can get our hands on it as soon as in fall. If this news is true, it will be the first time that Huawei Mate series phones use 40W fast charging, which will undoubtedly greatly enhance their charging experience.