A couple of weeks ago, Huawei announced that Huawei Mate 10/Mate 10 Pro will get the EMUI 8.1 system update in mid-July which would significantly improve the user experience and general performance of these devices by adding 960fps super slow motion videos capability, AI photography master, 3D portrait light effect, smart gallery and many other practical features. This afternoon, Sun Yaping, head of Huawei’s mobile phone product line management team, announced that Mate 10/Mate 10 Pro will get the EMUI 8.1.0.321 update today at 15:00 and only 50,000 registrations will be taken for now. Presently, users of these smartphones can go to Huawei’s pollen club and click “Member Services” – “Upgrade early adopters” to apply for the latest EMUI 8.1 system. 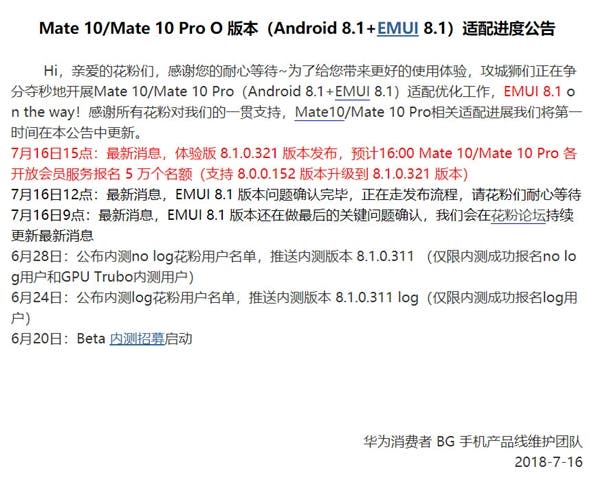 The Huawei Mate 10 series was released in China last October, and it was launched with the EMUI 8.0 system based on Android 8.0 depth customization. In March this year, Huawei added face recognition to the Mate 10 series via an update while in May these smartphones received an update that brings super night scene mode to make its night shooting ability significantly better. In June, Huawei’s Mate 10 series was the first to implement the GPU Turbo technology upgrade which improves its graphics computing efficiency by 60% and reduced the power consumption by 30%.

Previous Meizu 16 plus front panel leaks ahead of August launch