Xiaomi’s smartphone shipments have had a significant growth in the last year and the first half of this year. It could reach new heights not only due to the Mi series phone but due to the Redmi line handsets as well. But there is one thing we should pay attention to as well. Chinese customers are focusing on high-end models more. So the manufacturer has done a quite smart move by entering the Indian market, where the mid-range and low-end cost-effective smartphones are favorite. 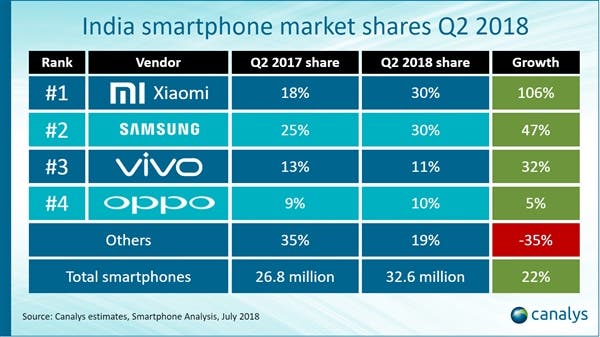 According to the latest report from Canalys, in the past two quarters, the combined share of Xiaomi and Samsung in the Indian smartphone market increased from last year’s 43% to a record 60%. Among them, Xiaomi shipments exceeded 9.9 million units, accounting for 30.4%, up 106% year-on-year, while Samsung shipped 9.9 million units, accounting for 30.2%. The year-on-year growth was 47%. In other words, Xiaomi is still slightly ahead. 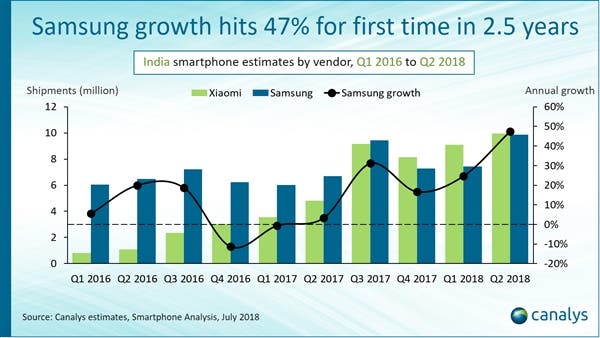 From the historical data, Xiaomi’s shipments in India have dominated for three consecutive quarters, maintaining the suppression of Samsung. It is worth noting that the performance of VIVO and OPPO in the Indian market is also relatively eye-catching, entering the TOP4. They also maintained a growth trend in the second quarter.

However, Canalys analyst TuanAnh Nguyen predicts that in the future, Samsung will once again surpass Xiaomi by virtue of technology and supply chain advantages.