Since the release of Huawei’s latest technology, GPU Turbo, the company has been releasing this update to its devices and the new smartphones are coming with this feature out-of-the-box. A couple of weeks ago, Honor announced the GPU Turbo version of Honor 10 with 8GB of RAM dubbed Honor 10 GT. Now, the company took to its official Weibo handle to reveal that this smartphone will officially go in sale on July 24th (tomorrow) and it comes with a 3299 Yuan ($491) price tag. 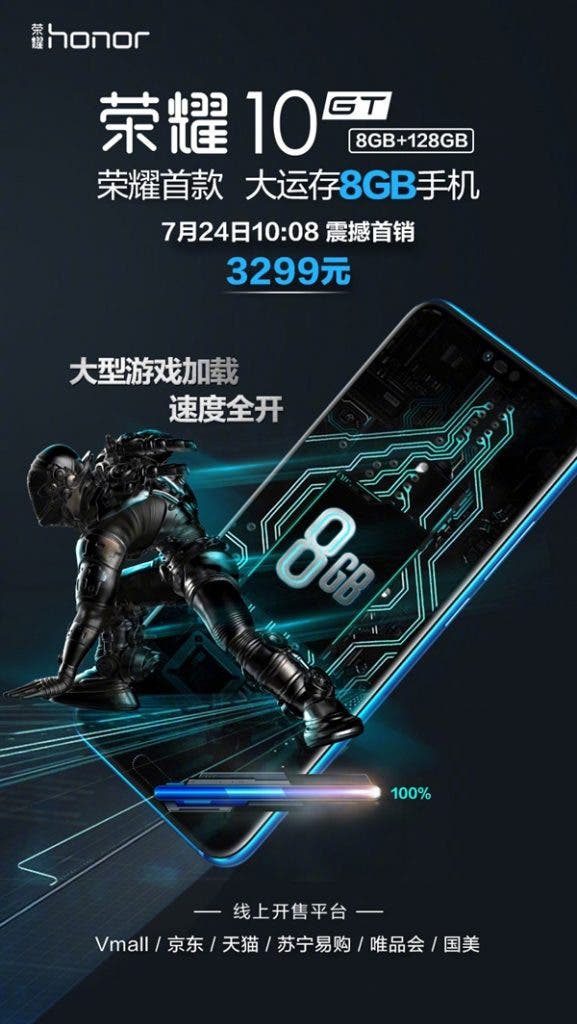 Like we said earlier, the Honor 10 GT comes with 8GB of RAM making it the first smartphone in the Honor series to come with such large RAM. It also has 128GB of internal memory which is what we find many flagships these days. It is expected that the graphics performance of this smartphone will be higher than its peers from other manufacturers and most importantly, its power consumption will be reduced by about 30%. According to the official notes from the GPU Turbo launch, this technology has opened up the processing bottleneck between EMUI operating system and GPU/CPU. Since it improves GPU and CPU performance, it could be the ultimate solution to hardware stacking in Android devices. For now, only Huawei devices have this feature but the company does not intend to monopolize the feature like its Kirin chips. If its performance is significant, then it wouldn’t take long for other OEMs to key into the GPU Turbo program.

As a reminder, Honor 10 GT is powered by a Kirin 970 processor coupled with 8GB of RAM and 128GB of internal memory. It is equipped with a 5.84-inch display with a notch and thin side bezels. In the camera department, we have a 24MP+16MP dual AI rear camera coupled with another 24MP shooter upfront for selfies. The lights of this smartphone are kept on by a 3400 mAh battery.

Next Leak: Snpadragon 730 to be built on 8nm LPP process, get dedicated NPU