The Snapdragon 700 series is a promising new generation of chips that is meant to bridge the gap between the SD6xx and SD8xx chips. The first of that series was the Snapdragon 710 that now sits in a number of new devices like the Mi 8 SE. But Qualcomm is already building a new one to add to the brand new series. A new leak by Suggestphone.com has revealed the entire capabilities of the upcoming Snapdragon 730 SoC from Qualcomm and things just keep getting better for mid-range devices. 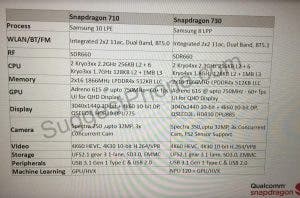 According to the new leaked sheet, the Snapdragon 730 will be built using the 8nm LPP (Low Power Plus) process while the SD710 was created using 10nm LPE (Low Power Early) process. This results in 10 percent performance boost and 15 percent power efficiency. The most significant changes could be seen in the camera department with the new chip employing the upgraded Spectra 350 ISP for imaging with capacities for up to 32MP cameras.

The other major difference is the addition of a dedicated NPU unit which isn’t present on the SD710. This should theoretically bring better AI applications for the camera and other stuff for the Android system. Besides these two, there are minor improvements in the clock speeds as well compared to SD 710.

Qualcomm is also working on a Snapdragon 720, and this is the latest new chip under development that has come to the fore. No release dates are known as of yet but overall things look great for budget smartphones in the coming months ahead.