Li Nan, the Senior Vice President of Meizu took to Weibo, and in a corny post revealed the press renders of the Meizu 16 and 16 Plus. The post by the VP was in response to the listing on TENAA that we reported earlier. If Google Translate is to be believed, the post says, “The photo of the Ministry of Industry and Information Technology was really ugly. . .”. 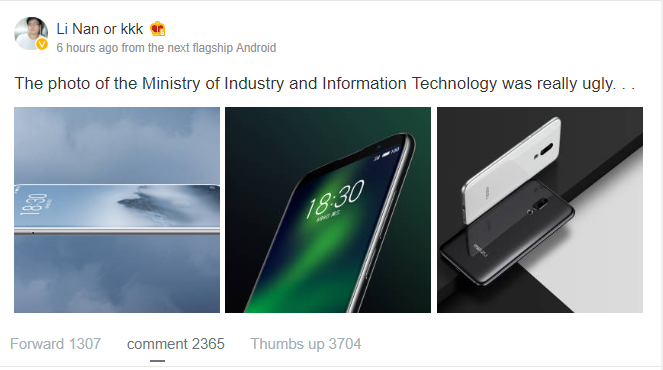 He does have a valid point. The images on the TENAA listing overshadow this genuinely decent looking device. The phone is thin as we know from the listing and the press renders confirm the same. There’s that in-display fingerprint scanner prompt on the bottom part of the screen. The display looks great thanks to the curved edges and thin bezels all over. I wonder where I might have seen this design before, *cough*samsung*cough*. The back is made of glass and houses a vertically aligned dual camera setup accompanied by the ring-shaped LED flash. The power button and volume rockers sit on the right side of the frame while the sim tray sits on the left. And guess what, this phone has a 3.5mm headphone jack! It flanks the USB Type-C charging port on the left and the speaker grill sits on the right. The glossy Black looks great, the white, not so much, but that’s a very personal choice.

The Meizu 16 and 16 Plus are all set to be launched on the 8th of August. There are tons of speculations floating around what these phones are going to bring on the table. Jack wong even teased the pricing of the phones. So far, judging from the reports, it seems like Meizu might have got the equation right on this one. But only time will tell whether the latest flagships by Meizu make any impact on the market.

Next Honor Note 10 Listed on Jingdong