The Sony Xperia XA3 was recently spotted on the Eurasian Commission. The said Commission is responsible for certifying phones for Russia, Belarus, Armenia, Kazakhstan, and Kyrgyzstan. The XA3 has made an appearance alongside the Xperia XZ2 Premium. 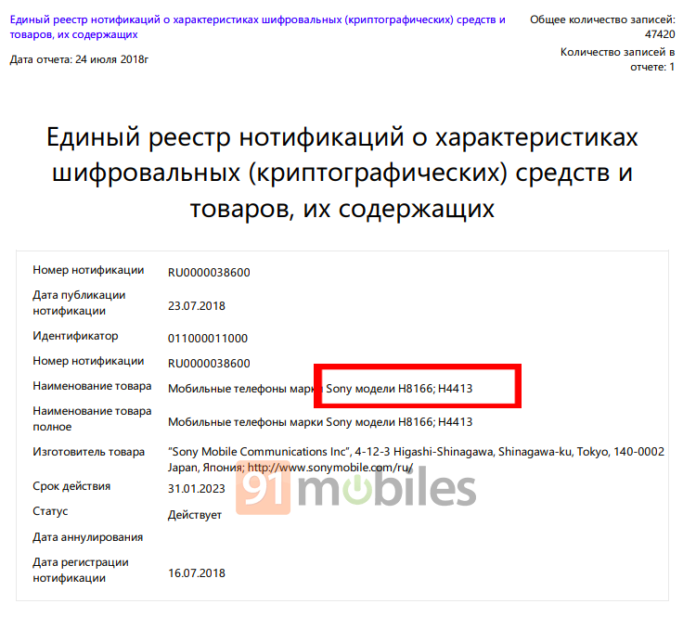 The XA3 was listed under the model name H4413. There’s reason to believe that this model number corresponds to the XA3 since the H4xxx naming convention is used by Sony for their mid-range phones and H6xxx is used for XZ phones. There have been no reports surrounding the Xperia XA3 so it’s a surprise that it has passed by the Eurasian Commission. The XA3 will succeed the XA2 and XA2 Ultra which were recently revealed at CES (Consumer Electronics Show) 2018.

Sony has not really been an innovator in the past few years as far as their smartphones are concerned. They are still sticking to the age-old 16:9 display, mediocre specs and high prices. There’s nothing unique in Sony’s Xperia phones. The Xperia XZ3 that had recently leaked seems to have taken one step in the right direction with the alleged dual cameras on the back. Will the Sony Xperia XA3 bring to the table something new? Will it be at par with today’s competition? We cannot say for sure since there’s hardly anything we know about this phone. But judging from Sony’s recent past, expect a beefy camera and mediocre specs on this one.

Next Report : Galaxy Note 9 Pre-Orders In India Starting From Augist 19