The Sony Xperia XZ3 is rumoured to be showcased at the IFA 2018 tech trade show in Berlin, Germany on 30th August. Sony has confirmed that it will be present at the show but has not revealed whether it’ll be bringing the Xperia XZ3 with it. While rumours are still fresh, UK-based online retailer, MobileFun has already listed the Xperia XZ3 with all its specs and pricing.

According to the listing, the Sony Xperia XZ3 will sport a 5.7-inch display with a 2160 x 1080p resolution hinting at an 18:9 aspect ratio. Qualcomm’s Snapdragon 845 chipset will sit under the hood coupled with 6GB RAM and 64 GB of onboard storage (expandable via microSD). A dual camera setup of 19MP+12MP sensors will be present on the back while the selfies will be taken care by a 13MP snapper up front. It will be powered by a 3240mAh battery and Android Oreo with Sony’s minimalistic UI on top. The Xperia XZ3 is priced at $994.97 (unlocked). 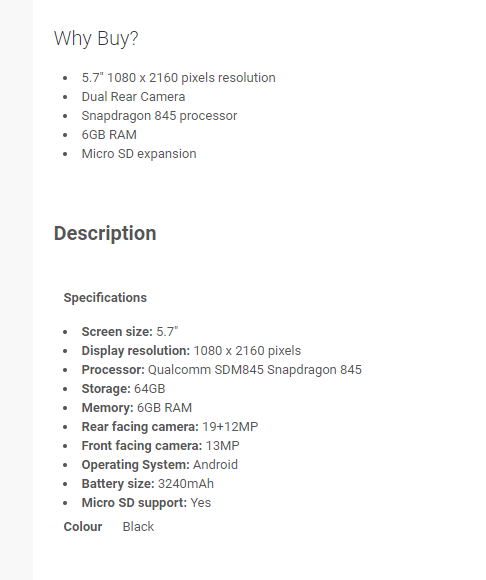 An earlier report detailed the complete specs of the Xperia XZ3. These rumours seem to align well with the listing on MobileFun. There is a chance that the listing is fake or maybe put up for a test run. Can’t say for sure. So I would suggest you take this report with a pinch of salt. Sony will likely unveil the next batch of the XZ series at IFA 2018. Stay tuned!

Previous OnePlus 6 Receives a 96 on DxOMark