Sony is known for refreshing its portfolios in six months. It has done so in the past and based on a new Xperia XZ3 leak, looks like it will do it again. A full-blown spec sheet has now been revealed to all in the blogosphere yesterday. This could harm the prospects of the current flagship Xperia XZ2 which is barely three to four months old.

Speaking about the leaked spec-sheet, it suggests a few big changes while most other aspects are carried forward from the Xperia XZ2. Talking about differences, a dual camera is on the top of the list. It seems the XZ3 will come with a 19MP RGB sensor with a f/1.8 aperture as well as a 13MP monochrome unit. RAM will be beefed up to 6GB from 4GB while processor will remain the same (SD 845). The battery will also be slightly bigger at 3,240mAh compared to 3,180mAh of the XZ2. Of course, support for Quick Charge 3.0 is expected. The display is believed to be 5.7-inches with 1080 x 2160 Full HD+ resolution and 18:9 aspect ratio. 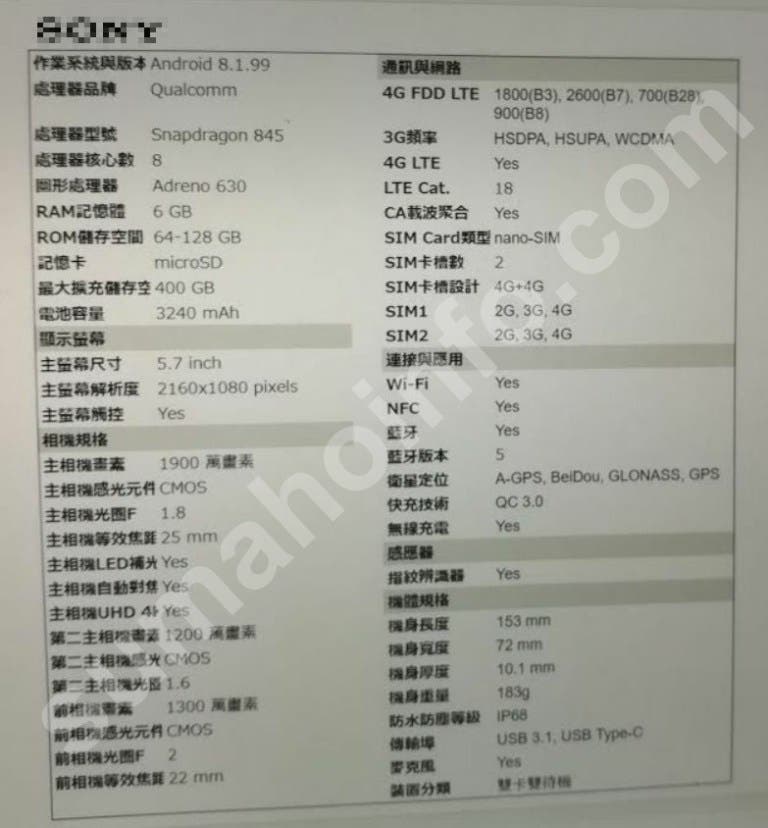 There are two variants listed on the alleged spec-sheet – 64GB and 128GB. Besides this, dual SIM, 4G VoLTE, micro SD support, and USB Type-C have also been listed. While we don’t know the exact look of the handset, the dimensions are described – 153 x 72 x 10.1mm and weight is 183 grams. There’s also IP68 rating which isn’t new for a Sony flagship.

Do note that even though the spec-sheet has leaked, we still know nothing about the handset’s release date or price. Most likely, it will be above Rs 45k. For more info, you can visit the source link below.