If you like stock Android, then you probably must like Motorola’s skin on Android that is a very close version of stock. But the company is now gearing up for an Android One phone, renders of which leaked recently. Today, we also now have an idea of its internals, courtesy of a leaked image. We’re talking about the Motorola One Power.

The Motorola One Power closely resembles the Lenovo Z5 in terms of looks. It has a notch but a much bigger notch like the iPhone X. Motorola has been staying away from the notch hype but it looks like now it has given in. The similarity with the Z5 is there to be seen in the components too. When you see the Snapdragon 636 powering the handset, you know that similarities go way beyond just the visual level. It has a 6.2-inch 1080p display with a 19:9 aspect ratio. There is 4GB of RAM and 64GB of storage, while the Android version is 8.1 obviously. 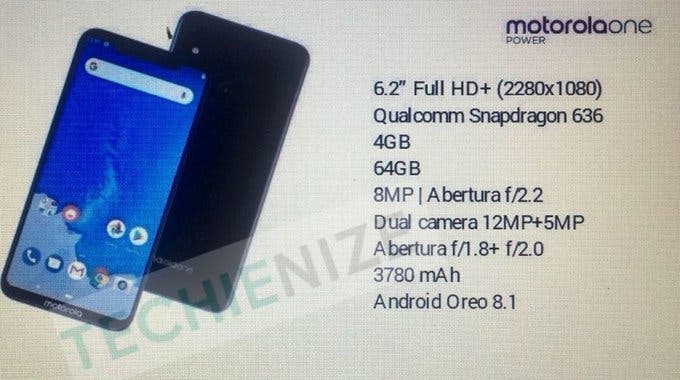 The cameras are also detailed here as being a combo of 12MP + 5MP on the rear with the aperture f/1.8, f/2.0 respectively. Battery seems to be a highlight of the device with a chunky 3,780mAh cell purported to be inside the chassis.

That is all for now, we don’t know anything about pricing and availability of the handset right now. But it looks like Lenovo has learnt a new trick from Xiaomi and for now it could serve the struggling phone maker well.

Next [GizPoll of the Week] Quasi-Flagship Xiaomi Mi 8 SE - Hot Or Not?