We are still basking in the euphoria of the Xiaomi Mi 8 series release and of the three phones, the Xiaomi Mi 8 and Xiaomi Mi 8 Explorer Edition is already well known. How about the Xiaomi Mi 8 SE? For starters, it uses a Qualcomm Snapdragon 710 SoC and this is the first time any phone is using this chip. Overall, what do we think about this smartphone? It is a smaller version of the Mi 8 series and it promises comparable performance. Let’s take a look at some details worth mentioning

Xiaomi Mi 8 SE is a quasi-flagship smartphone that is specially created for users who like small-screen smartphones. But if you look closely at this phone, you will find Xiaomi Mi 8 SE is cooler than we all think. Unlike the relatively sleek design of Xiaomi Mi 8, Xiaomi Mi 8 SE’s overall body line is very tough, giving people a sense of neatness and competence. Although the screen size is as high as 5.88 inches, its body size is only comparable to that of a traditional 5.2-inch screen. The overall size is very small and the user needs just one hand.

Xiaomi Mi 8 SE is the world’s first smartphone to use the Qualcomm Snapdragon 710 flagship mobile platform. In addition to the flagship processor, the Snapdragon 710 is the first chip manufactured using a 10nm process. It is almost identical to the core architecture of the flagship Snapdragon 845. It comes with a Kryo 300 series CPU, Adreno 600 series GPU, Spectra 250 ISP, Hexagon 685 DSP and X15 LTE baseband. Its Adreno 616 graphics processor increases the graphics by 35%.

In terms of the camera, Xiaomi Mi 8 SE comes with a rear-mounted 12MP + 5MP AI super-sensitive dual-camera, the main camera sensor model is the same as the Xiaomi Mi 8 with a Sony IMX363 sensor, which has a 1.4μm unit pixel area and can effectively enhance the amount of light in low light environments. The supporting sensor is quite good too. It also supports Dual PD’s high-speed focus technology from SLR, which enables Xiaomi Mi 8 SE to focus quickly and accurately in low light conditions. At the same time, Xiaomi Mi 8 SE camera also supports AI scene camera and it can identify 206 kinds of scenes with intelligent optimization of camera effects.

On the front, Xiaomi Mi 8 SE has a 20MP soft-light self-timer camera, which supports four-in-one technology for activating photosensitive pixels in a dark light environment. The single pixel sensing area completely takes care of images in poorly illuminated environments. It makes night photo brighter and suppresses noise. If the environment is well illuminated, it uses software algorithms to restore the 1μm pixels arranged in the normal GRBG, so that it has a high resolution of 20MP and fully retains the details of the picture. 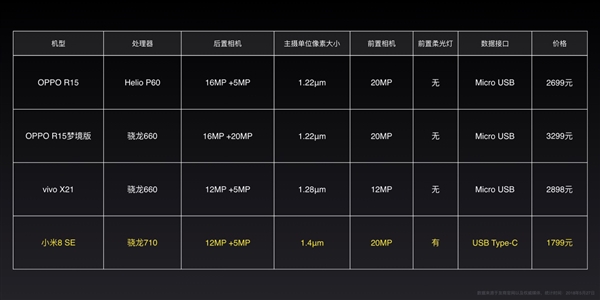 Considering the hardware, camera, display, and price of this device, do you think that the Xiaomi Mi 8 SE is hot? Let us have your votes in the polls below and if there is anything you need to add, let us know in the comments.

Next Four Nokia 5.1 variants clear FCC ahead of launch in the US