The popular smartphone manufacturers have been unleashing multiple devices. Even the likes of Bluboo, Umidigi, Ulefone and other Chinese second class OEMs has unleashed a couple of smartphones in the first half of the year. Now, we have a new smartphone from CoolPad with an entry-level pricing but the specs are amazing. The CoolPad Cool Play 7 was launched yesterday and it will be selling for 799 Yuan ($118) from August 2. 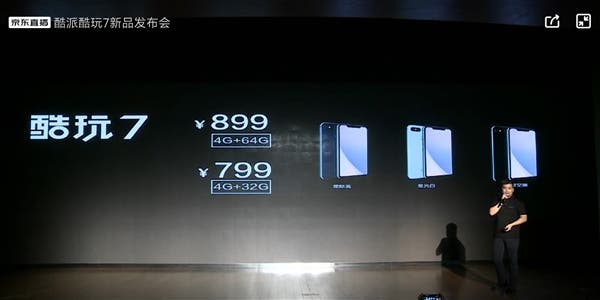 This smartphone comes with a 5.85-inch with a notch. According to the release notes, the display reaches 90% screen-to-body ratio and it uses a sapphire pattern cutting process to make the streamlined glass delicate and crystal clear. In addition, the nano-scale anti-fingerprint coating makes the body last longer and clean. The Coolpad Cool Play 7 is powered by a MediaTek MT6750 eight-core processor coupled with 4GB of RAM and 32GB/64GB of internal storage. In the camera department, we have a 13MP rear camera which is supported by an 8MP shooter for selfies. The selfie camera can effect many alterations like big eyes, face-lift, skin brightening, body whitening and other multi-self self-timer effect.

CoolPad Cool Play 7 supports AI facial recognition, which identifies five crucial points in the face to accurately and instantly unlock the device. At the same time, Coolpad 7 retains the back fingerprint, and different fingerprints can also launch different applications. In addition, CoolPad Cool Play 7 also has a built-in AI voice assistant which allows users to conveniently operate the phone using the voice when it is not advantageous to use the hands. While the 4GB + 64GB version sells for 899 Yuan ($132), the 4GB + 32GB will be sold for 799 Yuan ($118) from August 2.