Chang Cheng, Lenovo Group’s Vice President, claimed on Weibo that the Chinese company will be the first to launch a 5G smartphone and it will be powered by the Qualcomm Snapdragon 855. The Snapdragon 845 is currently Qualcomm’s flagship chipset which was launched back at the end of 2017. There is a possibility that we may get to see the 855 by the end of this year. 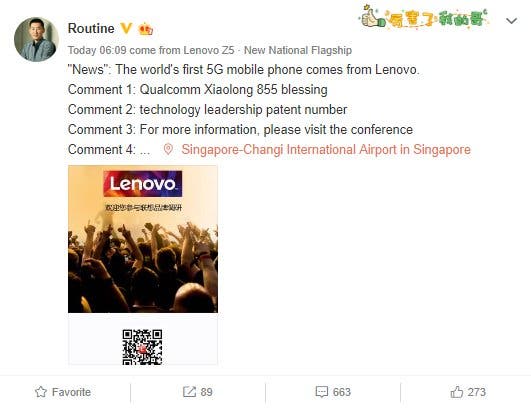 Samsung’s Galaxy S10 series which is rumoured to debut in the first quarter of 2019 might sport the 855. Lenovo claiming to be the first to launch a 5G phone seems like a bluff based on Chang Cheng’s previous claims on social media. Before the Lenovo Z5 was launched, the Lenovo Group VP portrayed it as a flagship device. Who can forget the company’s claim of the Z5 sporting 4TB of storage? There were a plethora of rumours claiming the presence of new tech on the phone, which is hardly true. If anything the Z5 is a mid-range phone with decent specs but its definitely not a flagship.

This seems to be another move by the company to generate hype for its upcoming products. A Lenovo smartphone recently passed by TENAA and it does not seem to be a 5G smartphone. If we are to believe Chang Cheng, then the Lenovo 5G phone might make an appearance early next year.