According to the report, Huawei shipped 54.20 million smartphones in the second quarter, up 40.9% year-on-year. Its market share achieved 15.8%, which is a real step forward in comparison to last year’s 11.0%. The demand for the Huawei P20/P20 Pro series phones is very strong, and the Honor series models showcase identical sales at online platforms. So this result is quite expected.

Apple’s smartphone shipments were 41.3 million units, up 0.7% year-on-year. The market share of the Cupertino-based company is 12.1%, up by 0.3 percentage points from 11.8% in the same period of last year. They could get such a small increase due to the increase in iPhone sales. Apple specifically pointed out that the iPhone X is the best-selling iPhone model in the second quarter. 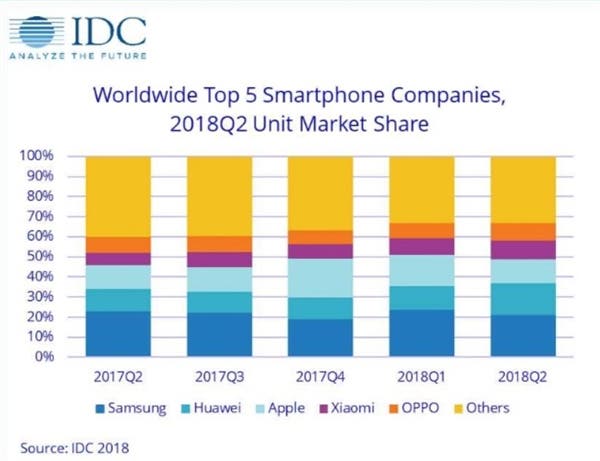 “The continued growth of Huawei is impressive, to say the least, as is its ability to move into markets where, until recently, the brand was largely unknown,” said Ryan Reith, program vice president with IDC’s Worldwide Mobile Device Trackers. “It is worth noting that Apple moved into the top position each of the last two holiday quarters following its product refresh, so it’s likely we’ll see continued movement among the top-ranked companies in 2018 and beyond. For most markets, the ultra-high end ($700+) competition is largely some combination of Apple, Samsung, and Huawei, depending on the geography, and this is unlikely to change much in the short term. At the same time, Xiaomi, OPPO, and VIVO are all slowly pushing their customer base upstream at a price tier slightly lower than the top three. This is an area they should all watch closely as the builds in this segment are getting increasingly more advanced.”

Samsung is still the world’s largest smartphone maker, but smartphone shipments in the second quarter fell 10.4% year-on-year to 71.5 million units, and its market share dropped to 22.9% from 22.9% in the same period last year. Sales of the Galaxy S9 and Galaxy S9+ did not meet expectations. Samsung attributed the decline in sales to the intensification of competition in the high-end market and the weakness of the overall smartphone market. They hope the Samsung Galaxy Note 9 that is going to release on August 9 will change the situation.

Next IDC Report: Xiaomi Is The Fastest Growing Manufacturer Globally