Today has been the big day for every Android enthusiast out there. After a long period of wait and beta testing, Google finally decided to release the official version of Android 9.0 Pie. After this unexpected rollout, things are starting to cool down, and we can finally start to see the new tidbits brought by this update. A new report brings us some information regarding Pixel 3’s way of interacting with the software.

Google decided to implement on its proprietary software its own vision for Gestures navigation with Android P. The traditional Home, Back and Recents buttons can be easily replaced by a Gesture Pill. While the Back button remains, you can swipe up the pill for Recent Apps, Swipe left to right to scroll through applications or do a quick swipe to return to the previous app. While some are enjoying Google’s vision for gesture navigation, the other part of users is still satisfied with the old-school buttons. Thankfully, Android Pie gives the option to use or not the Gesture Pill. Well, apparently this option won’t be available for the Pixel 3 and 3 XL owners. 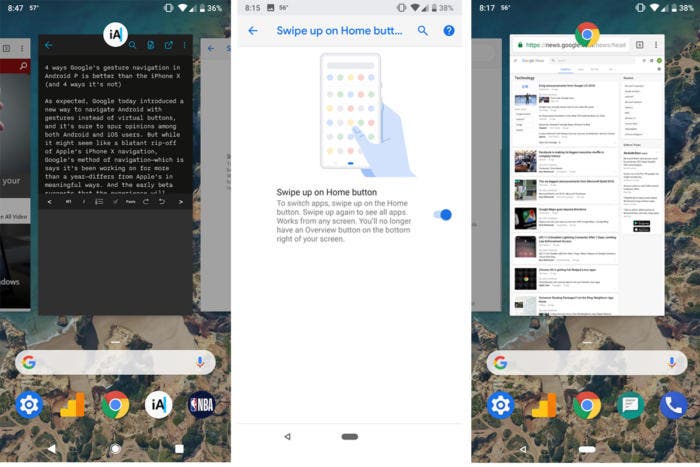 Enforcing the use of Gesture Navigation on the Pixel 3 and Pixel 3 XL will possibly help the new way of interacting with the home screen grow in popularity. However, it is another thing that will make the owners of Pixel 3 and 3 XL feel limited, in comparison to other smartphones from other brands. Worth noting, that the Gesture Pill still is miles behind from Apple, Xiaomi, and OnePlus solution, that are not intrusive like Google’s solution.