The Oppo R17 and R17 Plus/Pro were recently listed on TENAA. However, the listing only detailed the images and there was no sight of the specifications of the two smartphones. Today, a user on Weibo shared an alleged Oppo R17 spec sheet. 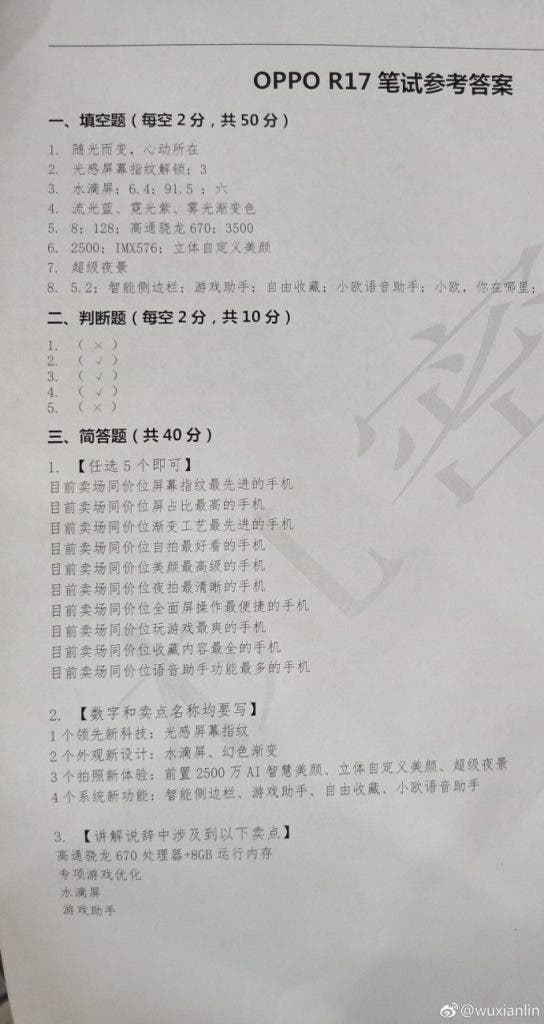 If the spec sheet is to be believed, the R17 will come with a 6.4-inch AMOLED display with a 91.5% screen-to-body ratio. The screen will be protected by Gorilla Glass on top. According to earlier reports, the R17 might be the first phone to sport the Gorilla Glass 6. The phone will feature an in-display fingerprint. Now, according to the TENAA listings, there will be one variant of the R17 which will sport a physical fingerprint scanner. So this variant might be the Plus/Pro version.

According to the spec sheet, the R17 will be powered by the Snapdragon 670 chipset coupled with 8GB RAM and 128GB onboard storage. The rear will sport a 16MP+5MP dual camera setup with Super Night Mode and the front will have a 25MP Sony IMX576 sensor. A 3500mAh battery with support for VOOC fast charging will be a part of the package. Android 8.1 with ColorOS 5.2 will be running the software. The R17 may debut by the end of this month or in the first few weeks of September.