Lenovo owned Motorola will officially bring the Moto Z3 to the Chinese market pretty soon, with the company’s official Weibo account now confirming same to be true. The device is tipped to go on sale August 15, but you can already pre-order the device via Jd.com, though pricing hasn’t been announced.

Announced last week in the US, the Moto Z3 is at the moment a Verizon exclusive but will be making a trip to China out of the state later in August. The device itself isn’t a 5G phone, but the maker says it should be able to deliver data 10 times faster than other 4G LTE devices at speeds up to 5Gbps (5 gigabits per second) when a 5G mos is attached to it. 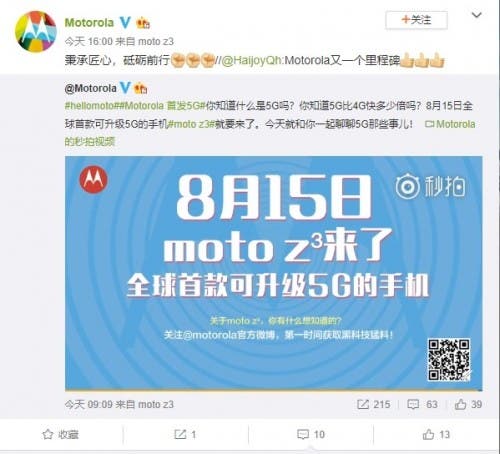 While the Verizon exclusive Moto Z3 boasts of a 4GB RAM and 64GB storage, the one launching in the Chinese market will get more RAM and storage at 6GB RAM and 128GB storage respectively. Other specs are pretty the same, but pricing for the Chinse market remains unknown.

Previous VIVO Y81 Landing in India Next Week at 14.000 Rupees