Some weeks ago, Chinese manufacturer, Xiaomi, was listed on the Hong Kong Stock Exchange. After an initial rough start in the market, the company stabilized and has been doing quite well. In recent times, Xiaomi’s stocks have attracted a series of unbelievable ratings and analysts believe that the company will perform even better. The recommendation from joint sponsors Goldman Sachs Group Inc. and Morgan Stanley are that the shares should be bought and a strong rating was given to Xiaomi stocks by analysts such as JPMorgan Chase and Co. and China International Capital Corp. As of now, predictions have it that Xiaomi shares will rise to HK$18.60 and it could possibly grow 9.4 percent higher than the offer price. 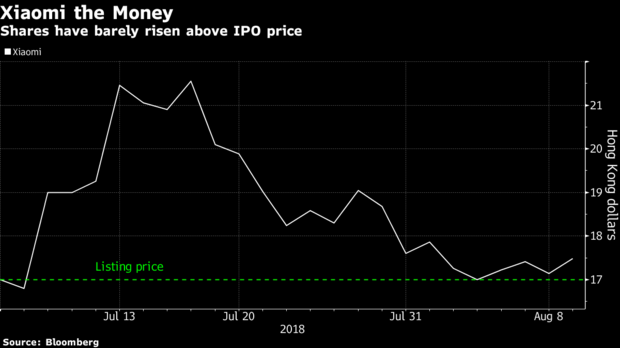 Generally, analysts believe that Xiaomi will rise 22 percent from Wednesday’s close and the trend will probably continue for a while. With about 190 million users worldwide, Xiaomi’s Internet services and its share of the hardware market in China contributes significantly to its surge in revenue and earnings. According to CICC and Morgan Stanley, Xiaomi’s revenue, earnings, and net profit should grow by 45%, 60%, and 61% respectively between 2018 and 2020.

Next Epic games launches Fortnite for Android, exclusive to Samsung flagships for 3 days