Yesterday, Jack Wong, Meizu’s CEO confirmed that the next Meizu smartphone won’t be called the X8. Instead, it will be known as the Meizu 16X. After weeks of reports and leaks wherein it was assumed that the X8 would be launched alongside the Meizu 16 series, Meizu has chosen to launch the phone sometime in September. 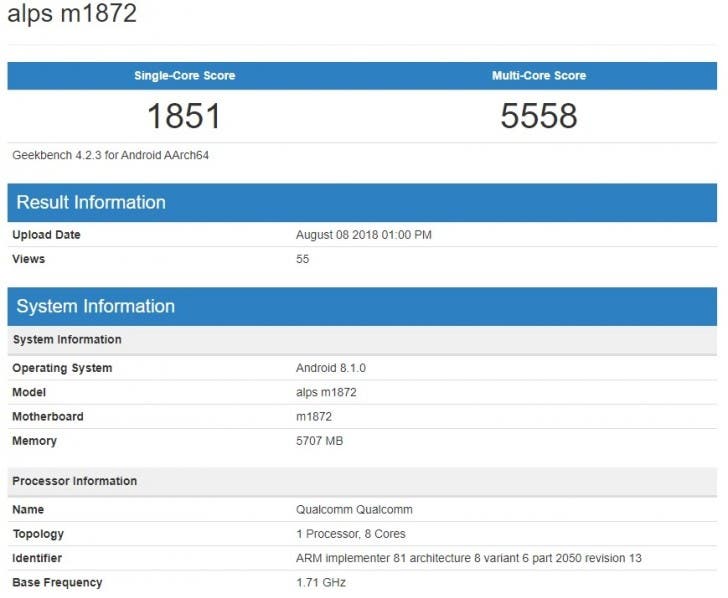 The Meizu 16X has since then passed by Geekbench and confirmed the presence of the Snapdragon 710 SoC. The phone is listed under the moniker ‘alps1872’. It sports the 710 with 6GB RAM and Android 8.1 Oreo. It scored 1851 points in the single-core and 5558 points in the multi-core tests.

Jack Wong has pegged the X8 aka the Meizu 16X as a competitor to the Mi 8 SE which sports the same chipset. Apparently, the 16X will be priced lower than the Mi 8 SE and offer better performance. The scores on Geekbench are lower than that of the Mi 8 SE but since it’s probably a pre-production device, it might get better scores on the final piece. Jack Wong confirmed yesterday that the 16X will be hitting the shelves sometime in September. According to earlier reports, the 16X will be Meizu’s first smartphone with a notch. We expect more information to make its way to us soon. Stay tuned!