On August 10, Xiaomi officially released the emerald green edition of the Xiaomi Mi MIX 2S. The major difference between this version and the regular edition is in its design. The Xiaomi MIX 2S Emerald Version is jointly developed by Xiaomi and Dunhuang Academy. It is inspired by the natural gemstone colour of Dunhuang murals (located in the vast desert in Northwest China, 25 km SW of the city of Dunhuang in Gansu Province). After almost a year of developmental works, this smartphone overcame the material limitation and it incorporates jade colour into the ceramic body. 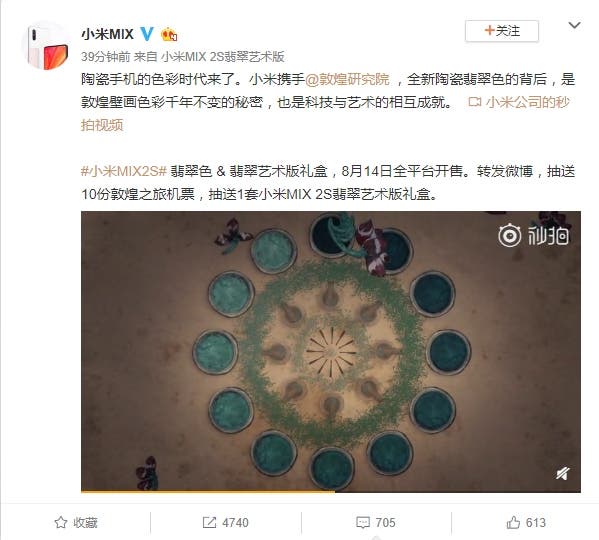 All other aspects of this smartphone are consistent with the regular Xiaomi MIX 2S. It uses a 5.99-inch 2160×1080 display with Qualcomm Snapdragon 845 processor, 8GB of RAM and 256GB of internal storage. Xiaomi MIX 2S also comes with a built-in AI intelligent voice assistant, Xiao AI. With this feature, users can check the weather, exchange rate conversion, translation menu, flight dynamics, etc.

In the camera department, the Mi MIX 2S is equipped with a 12MP wide-angle + 12MP telephoto dual cameras on the rear. The wide-angle lens is a Sony IMX363 sensor which supports Dual PD dual-core focusing. The unit pixel area is 1.4μm and it supports four-axis Optical Image Stabilization (OIS). DxOMark scored this smartphone 101 points for the image section which is the same as the iPhone X. The lights of this smartphone are kept on by a 3400mAh battery. As of now, the Xiaomi Mi MiX 2S is already receiving the Android 9 Pie beta update making it the first Xiaomi device to get this update. The first official sale of the Xiaomi Mi MIX 2S Emerald Green edition is expected to take place on August 14.

Next Meizu 16X Shows up on Geekbench with Snapdragon 710