Earlier this year, an unannounced Sony branded smartphone with the model number H4413 appeared on the Eurasian lisitng for the usual certification. So far, we reports have linked the device to the Xperia XA3 which might be made official in the coming days.

And while we are yet to get concrete evidence confirming that, a similar Sony Xperia phone with model number H4233 has shown up on the Geekbench site where we now got to know a few of its basic specs. With an impressive single and multi-core scores, the alleged Xperia XA3 ran the Geekbench test with the Octa-core Snapdragon 660 processor coupled with 6GB of RAM. The mid-range device will boot Android 8.0 Oreo out of the box but may get an update to Android P soon after it is unveiled. 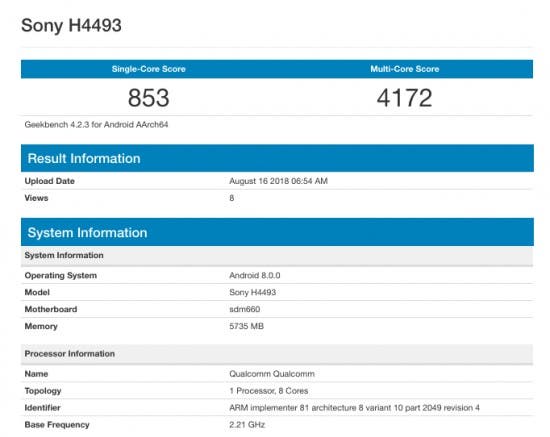 Sony hasn’t confirmed nor teased the device, but with the device now getting all the pre-requisite certifications,  we might see Sony unveiling the device at its IFA press briefing later this Month.

Next Xiaomi TwentySeventeen Analog Watches on Sale at Cafago