The Motorola One Power, which is now believed to be called Motorola P30 Note in China, is one of the upcoming and highly-anticipated Motorola smartphones. The handset has been a target of multiple leaks in the past weeks, and today surfaced in all its glory in a leak that confirms specifications and some of the features packed in the handset.

As per rumors, the handset will feature a complete aluminum construction featuring a vertically-aligned dual-camera setup on the rear and the Motorola logo that probably doubles as a fingerprint sensor on the middle. The dual-camera setup will be made of the combination of a 16MP shooter plus a secondary 5MP unit. On the front side, we can spot a 6.18-inch 19:9 FHD+ display with the controversial notch taking its place at the top. 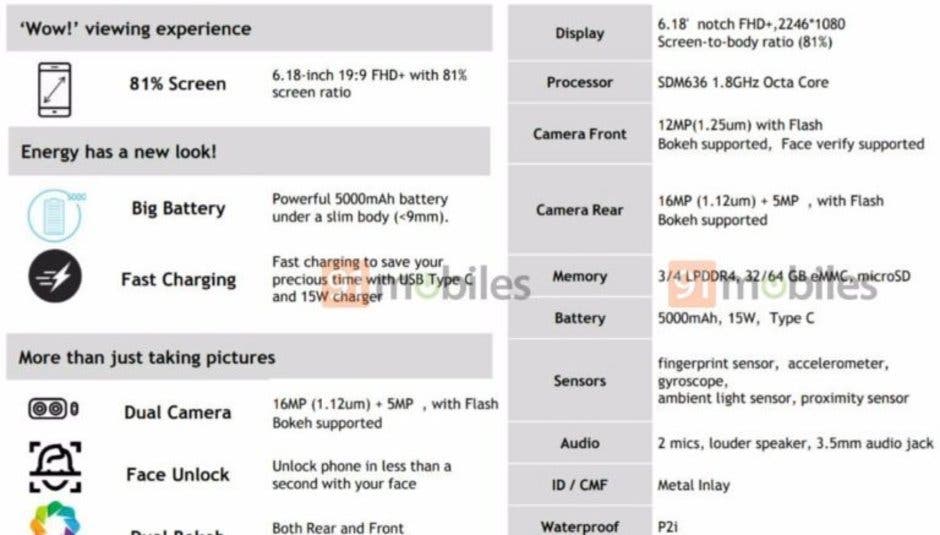 Despite the generic iPhone-esque design featured by most of 2018 midrange smartphones, the Motorola One Power shines due to the internals. That includes the excellent Kyro-powered Snapdragon 636 1.8GHz Octa-core that will be paired with either 3GB, 4GB or 6GB of RAM and 32GB or 64GB of onboard storage. Regardless of the variant, the smartphone strongest selling point will be its massive 4,850mAh battery that should provide a long-standing endurance, due to the power-efficient 14nm chipset. Despite the fact that there’s no evidence that the smartphone is run Android 9.0 Pie at the launch, there is a strong chance that the latest version of Android will be packed inside since One Power will be part of the Android One program. The handset front-facing 12MP camera will bring facial recognition and AI features that will improve the portrait pictures.

Up to the moment, there’s no official info pointing to when the Motorola One Power and the minor Motorola One handset will debut. But judging by the increasing wave of leaks, we have enough evidence to consider that its launch is pretty close. Worth noting, that since handsets are considered the spiritual successors to the Moto X4, we wouldn’t discard the possibility of a launch during the IFA 2018.

Previous Motorola One Power is actually the P30 Note after all