Today, Chinese manufacturing giant, Xiaomi, took to its Weibo account to announce its expectations of Qualcomm’s new generation flagship chip. This wouldn’t have been a big deal but for the reply of another manufacturer, Lenovo. Interestingly, Lenovo’s official responded, “More than you expect”. It now appears that the two manufacturers are going to do battle for first to launch a flagship smartphone with this chip. 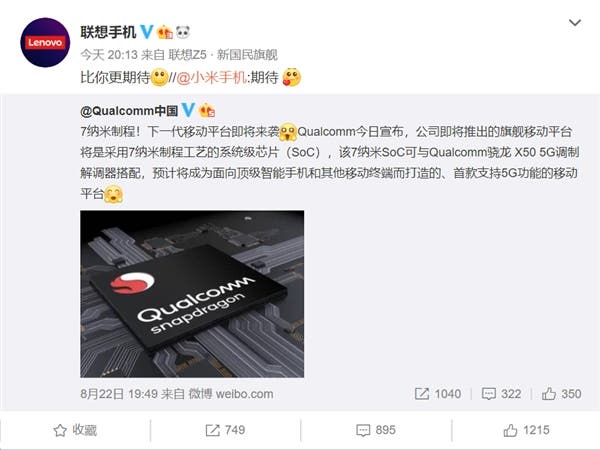 According to the information released by Qualcomm, the next-generation flagship chip will be built on a 7nm process technology for smartphones and other mobile devices. It is reported that this flagship chip will support 5G functions and it aims to bring the new intuitive experience and interaction supported by the energy-efficient aspect of AI to provide an excellent battery life and top-notch performance.

It is also worth mentioning that there are reports that TSMC will begin production of Qualcomm’s next-generation Snapdragon flagship chip in the fourth quarter of 2018. Thus we are expecting to have smartphones with this processor from 2019.